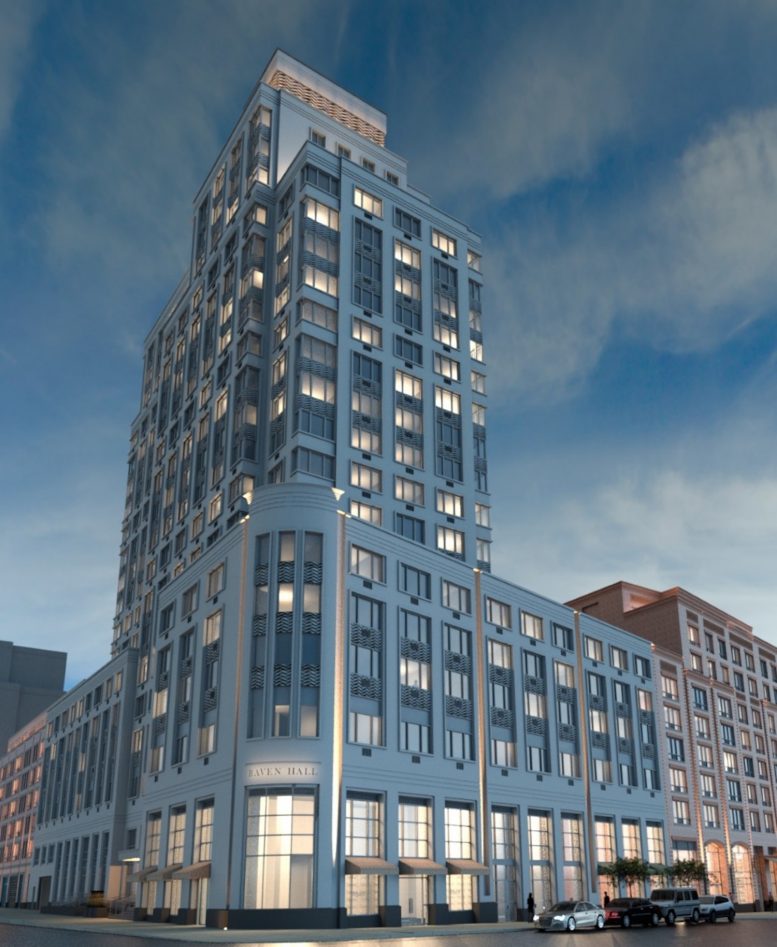 Developers and city officials recently joined to celebrate the completion of Raven Hall, a 22-story mixed-income rental building in Coney Island. The building is located at 2006 Surf Avenue and introduces a collection of 216 affordable apartments, a public parking garage, and 8,500 square feet of ground-floor retail space.

Located between the boardwalk and Surf Avenue, Raven Hall is the second phase of a seven-phase redevelopment of a vacant parcel that separates the eastern and western sides of Coney Island. As described in a statement from the city, the redevelopment is designed to improve the pedestrian connection between the two sides and increase foot traffic along the corridor. The site was formerly occupied by Ravenhall Baths, a public saltwater pool and bath house, which operated from 1867 until 1963, when it was destroyed by a fire.

“The state’s investment in Raven Hall will continue the revitalization of Coney Island as a vibrant and diverse beachfront community and an even better place to live,” said RuthAnne Visnauskas, Homes and Community Renewal commissioner. “With 216 apartments and retail space, residents will be able to live affordably and comfortably just steps from the historic boardwalk.”

“My administration will continue to confront the housing crisis through high-quality affordable housing projects that will improve the lives of residents and create vibrant communities,” New York City governor Kathy Hochul said. “This $133 million mixed-use development in Coney Island will enhance quality of life for residents and the entire community, while building a stronger economic future for this unique, historic neighborhood.”

The first phase of the Ravenhall Bath Site redevelopment, known as Surf Vets Place at 2002 Surf Avenue, was completed in 2019 and features 135 apartments for families and homeless veterans. The project was also financed by Homes and Community Renewal and the Department of Housing Preservation and Development.

This year, the state is poised to reach the goal of its current housing plan of creating and preserving 100,000 affordable homes and 6,000 with support services. Governor Hochul has built on this effort with a proposal for a new $25 billion, five-year housing plan that will create and preserve an additional 100,000 affordable homes in urban and rural areas across New York including 10,000 with support services.