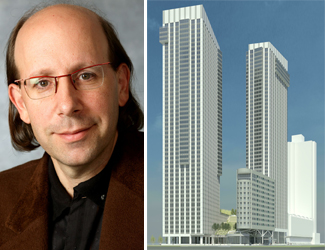 Besides Urban Ready Living and the Journal Square mega-project, yet another development will be breaking ground soon in Jersey City. 70 and 90 Columbus Street will be two 50-story buildings. The first to be built will be 70 Columbus, which will have 150 hotel rooms and 550 rental units above a retail base. 90 Columbus will be entirely residential.

The unfortunate part of the project is the architect of record, who just happens to be the nefarious Gene Kaufman. The project’s current design isn’t that terrible–certainly nothing like 99 Washington Street, or the myriad of other heinous hotels he has recently designed in Manhattan–but it definitely isn’t aesthetically pleasing. The towers are bland filler, and nothing more.
Though the design for ‘Urban Ready Living’ has been met with some criticism, at least it’s different from the simple glass boxes that have been the norm for new development in Jersey City. Kaufman’s towers conform to simplicity, and look like they’re straight out of Miami Beach circa 1985 as well.
Developments like Via Verde in the Bronx, by Dattner Architects, show that even affordable housing can be extremely attractive. There’s no reason developers should have to settle for mediocre architects like Kaufman, even if they have tight budgets. The extra density will be a welcome addition to Manhattan’s cousin across the river, but it’s clear that the developers could have designed a much more attractive project than what Gene Kaufman has produced.
Kaufman replaced Costas Kondylis as the architect of the project, which looked somewhat more attractive before the redesign. Phase one of the project, which will be 70 Columbus Street, is expected to break ground at the beginning of 2013.