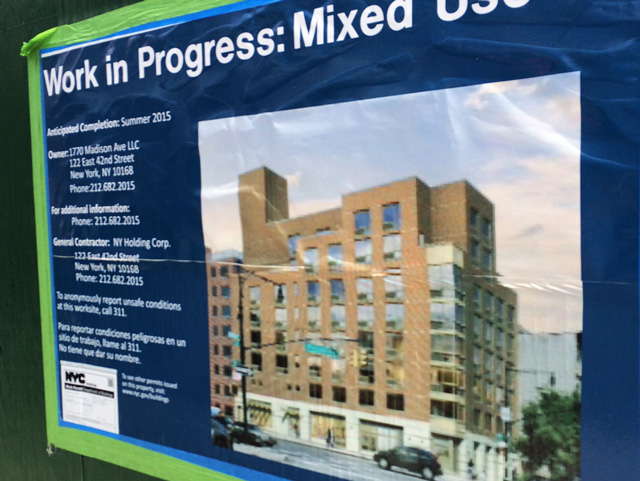 The first renderings have been posted on-site for a new building at 1770 Madison Avenue in East Harlem, which is located at the intersection of Madison Avenue and 116th Street; the images were sent in by a watchful tipster. Joseph Rabizadeh of the Low Income Marketing Group is developing the site, and the architect of record is Avinash Malhotra.

Permits for 1770 Madison Avenue indicate the building will span 36,675 square feet, with space split between a variety of uses. The first two floors will have 5,124 square feet of retail space, and 6,310 square feet dedicated to a ‘community facility,’ which will apparently be used as a medical office. The remainder of the project will be divided amongst 32 apartments. Design-wise, the glimpse is a tad blurry, but the aesthetic appears inoffensive and contextual. Zoning diagrams give an additional look at the project’s massing, and it will conform to the street-wall while enhancing the neighborhood through the contribution of new retail space.

While Harlem has seen significant improvements in recent years, vacant lots — like 1770 Madison Avenue — continue to plague the area. Restoring the neighborhood’s built form is an important first step in its revitalization, though if it is to live up to its highest potential, the damage that Robert Moses wrought must be fixed.