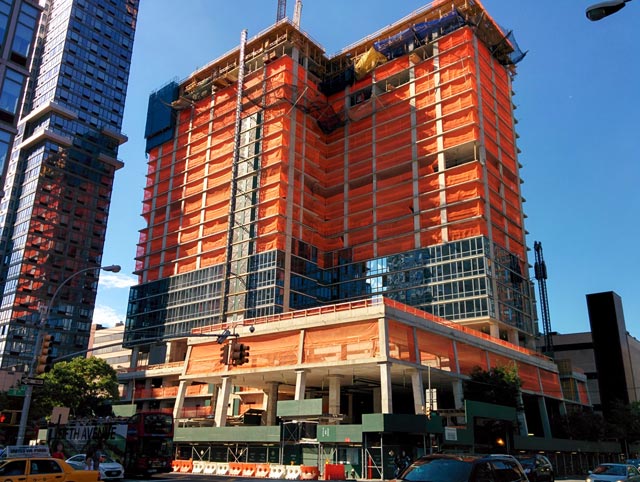 Construction is chugging along at Moinian’s 605 West 42nd Street, which is now reaching into the sky; besides vertical progress, the first of the tower’s glass has also appeared, and has begun to wrap around the structure. Goldstein Hill & West is the project’s architect, which is over one-third of the way to its 60-story pinnacle. The Commercial Observer recently reported that the Bank of China is providing Moinian with $550 million to complete construction of 605 West 42nd Street, which hopefully heralds additional funding for other major residential projects underway in New York City. While the push for office development in Midtown West has been substantial, plans for Silverstein’s 520 West 41st Street demonstrate the neighborhood’s pent-up demand for new apartments, which is throttled by New York State’s limit on residential FAR, and zoning that encourages office rather than residential development. As previously reported, 605 West 42nd Street will stand 656 feet tall, with a total of 1,189 units, making it the largest apartment building in New York City. Completion is expected at the end of 2015.