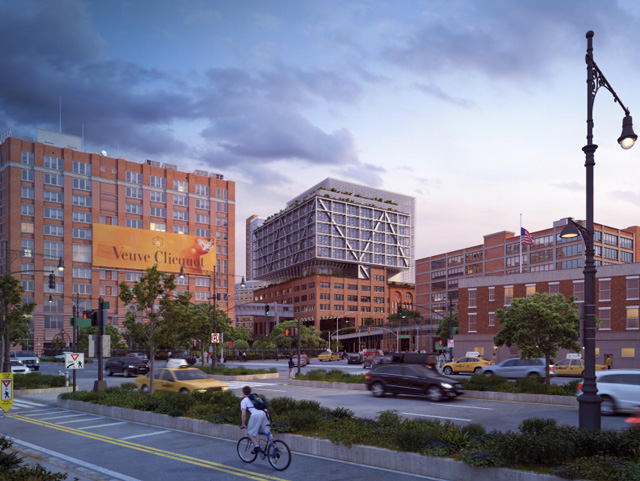 There hasn’t been any news on the Chelsea Market expansion since it was approved back in 2012 (has it really been that long?), but YIMBY has stumbled upon some renderings that show the project from some new angles. An overhead view shows the addition in context with the rest of the neighborhood, and is a reminder that the expansion is perfectly consistent with existing mid and high-rise surrounds — and when compared with nearby structures like the old Port Authority building, it’s actually undersized. The 10th Avenue component is the most prominent part of the expansion, and even that part will be relatively short. The new perspectives — and the comparatively small scope of what was approved — show the absurdity of complaints regarding the project’s height. Even if the taller version with the hotel had been approved, it would still be dwarfed by Related’s Caledonia rental building just to the north – and now, another 25-story hotel is rising just to the south, at 414 West 15th Street. The lack of progress is also worrying. The office market in West Chelsea is doing very well, but this project is not the financial slam dunk that ground-up, as-of-right construction would be. The work to build the addition will be very tricky and expensive, given the need to keep the market open during construction, and Jamestown had to agree to throw in millions towards the High Line and an affordable housing fund. Without the hotel component – which was axed after opposition by West Side NIMBYs – the project may turn out to be financially infeasible. That would be a shame, denying the area an attractive and modern piece of architecture, to say nothing of the construction and office jobs, as well as the additional millions in tax revenue that the expansion would bring.

Stymied by irrational NIMBY opposition — which looks even more ridiculous in the face of the new hotel rising on 15th Street — the original plan would have been better for both Chelsea Market and the surrounding neighborhood. While what was approved will still be beneficial, many years may pass before Chelsea Market reaches its full built-out potential as an even denser hub for New Yorkers and tourists alike.