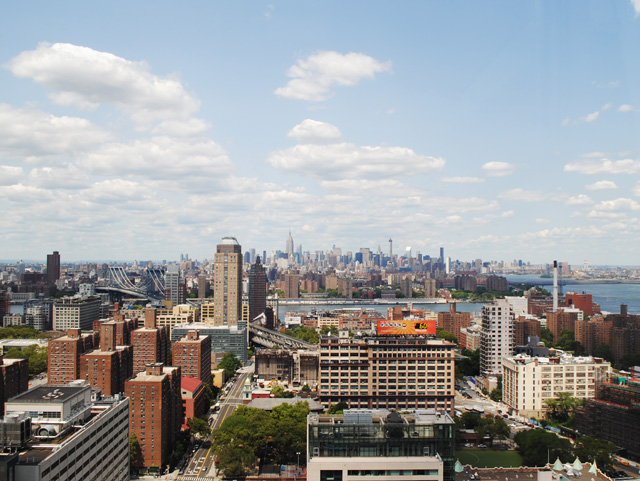 If you ask many New Yorkers, they’ll tell you that the city is one big construction site. They’ll picture the cranes on 57th Street and at Hudson Yards, Downtown Brooklyn and Long Island City, and then they’ll think of their own rising rents, and come to the conclusion that all of this added supply is simply not helping.

Amanda Burden, Bloomberg’s chief city planner, said something similar herself last year, when she told an audience that even though she “had believed that if we kept building in that manner and increasing our housing supply … that prices would go down,” she was sobered by the reality of steadily rising housing costs. The nonpartisans Citizens Budget Commission put out a report earlier today with a chart that completely debunked the premise of this line of thinking: New York City is, in fact, the single slowest-building big city in America that’s still growing in population.

Cheap cities like Miami and those in the Sunbelt were the fastest growers, and it’s understandable that they’d be growing faster than New York City, which has a much larger base housing stock. But what is more surprising is that New York grew slower than even other built-out cities like D.C. (which built 9.2 percent more homes than it had in 2000), San Francisco (8.8 percent) and Boston (7.3 percent) – all stereotyped as tough places to build. As it turns out, New York City is even worse.

YIMBY spoke on the phone this afternoon with Rahul Jain, who authored the report, and he emphasized that New York City does build a lot in absolute terms, just not very much relative to its existing stock.

“On a nominal basis,” he told YIMBY, “it’s actually quite large.” (New York City added 184,369 housing units between 2000 and 2012.) It’s only when you look at the growth as a proportion of the existing stock – just 5.8 percent over the 12 years – that the new construction looks so paltry. “It speaks to the size of our housing market, but it also speaks to the extent that we’re not building as fast as we could.”

New York City was not at the absolute bottom of big U.S. cities in terms of new construction, but it was at the bottom of cities that are growing in population. Philadelphia, Detroit and Chicago all built less housing relative to their 2000 stock, but these cities’ population counts either fell or stagnated over the period examined.

While Bill de Blasio talked a big game about accelerating construction, his goals aren’t much higher. His housing plan introduced earlier this year set a 10-year target of 80,000 newly-built units to be sold or let at below-market rates, plus another 100,000 market-rate units.

Talk about this on the YIMBY Forums