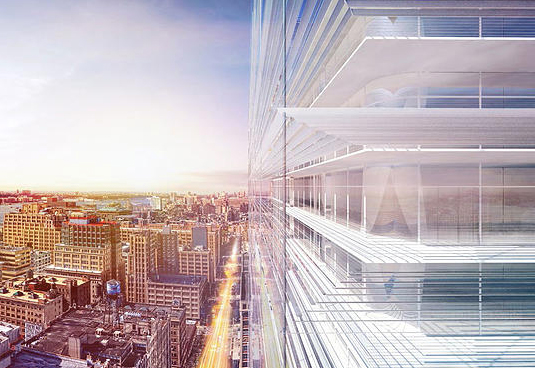 Last June, the first demolition permits were filed for existing structures at 60-64 Watts Street, part of an assemblage that extends to 100 Varick Street. The latter location will apparently be the official address of the ‘Soho Tower,’ as the site is dubbed on its website. And now, YIMBY has the first rendering of the project, which is being developed by Michael Shvo and Itzhaki Acquisitions.

The building’s architect has not yet been revealed, but the site can support a new structure measuring 280,000 square feet, which is enough for something visually substantial. Current plans appear to meet expectations for a rather tall high-rise, though the neighborhood was rezoned in 2013, with maximum height limits of 290 feet instituted.

That would make 100 Varick Street shorter than the nearby Trump SoHo, which currently dominates the neighborhood skyline, even though it only stands 498 feet tall. While the rendering isn’t exactly all-encompassing, the tower appears to have sheltered balconies wrapping around the upper levels, encased in a glass shroud.

The neighborhood is extremely transit-accessible, and additional height and density should both be encouraged, especially as the area transitions to residential. It was formerly the domain of industry, but the forces of gentrification overwhelmed what’s now known as Hudson Square in the 90s and early 2000s.

100 Varick Street will likely take aim at the super-luxury market, and while its location remains somewhat marginal, the prospect of additional nearby development signals a brighter future for Varick Street. Recent projects in the vicinity include a mix of uses, with an office building completed at 330 Hudson Street, and the Hotel Hugo opening at 525 Greenwich Street. For an idea of 100 Varick’s potential, YIMBY’s preliminary reveal of 100 Vandam offers a good comparison, and that tentative project is located just a few blocks to the northwest.

As for 100 Varick Street, no completion date has been announced, but additional permits for fencing were filed in January, hopefully offering a signal that construction will soon begin.