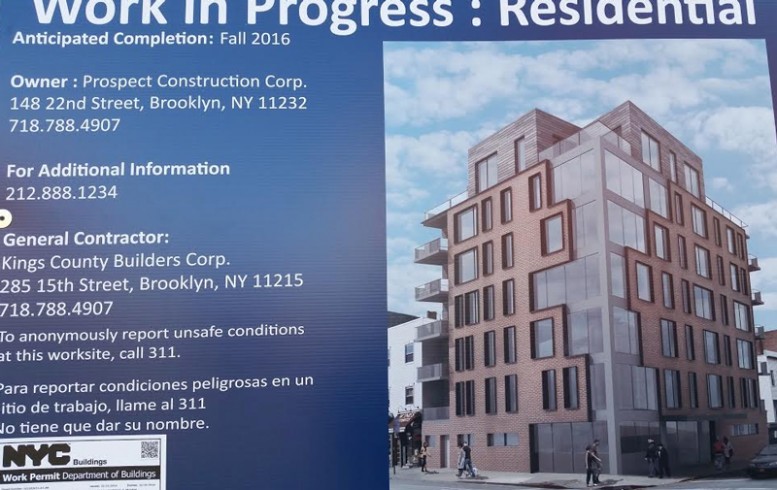 Last July, YIMBY reported on the first permits for a new residential development coming to 236 17th Street, in Brooklyn’s South Slope neighborhood. Now, we have the reveal for the seven-story project thanks to a tipster who spotted an on-site rendering.

The architect is Design Studio Associates, and permits list the developer as Nick Malafis of North South Slope LLC, though on-site signage indicates it is actually Prospect Construction Corp. 236 17th Street will total 19,993 square feet, which will be divided between 17 residences for an average unit size of almost 1,200 square feet, likely indicating condos.

The Schedule A shows seven parking spaces on the sub-level and five on the first floor, with three units per floor from levels two through six, and two residences splitting the penthouse floor.

While the overall design is an upgrade compared to the currently vacant lot, the building lacks ground-floor retail space. Onerous parking requirements are the cause, forcing the developer to dedicate the lower levels of the project to twelve spaces, exactly the number required by the zoning code.

Discussion is currently focused on reducing parking minimums for affordable housing, but projects like 236 17th Street shows exactly why they must also be removed for market-rate housing. Almost all New Yorkers live in market-rate housing, and the cost of new stock is artificially inflated by these continued minimums, which are a legacy of terrible 1960s urban planning.

Abandoning minimums as an incentive for creating affordable housing is a good thing, but abandoning them altogether would have a much larger impact, making all housing more affordable in currently neighborhoods currently afflicted by the requirements. Additionally, it would prevent the deadening of streetscapes — and while many people bemoan the arrival of chain stores, the real travesty is that space in new buildings that would be perfectly suitable for small businesses is instead being used for automobiles.

On-site signage notes that completion of 235 17th Street is slated for late 2016.