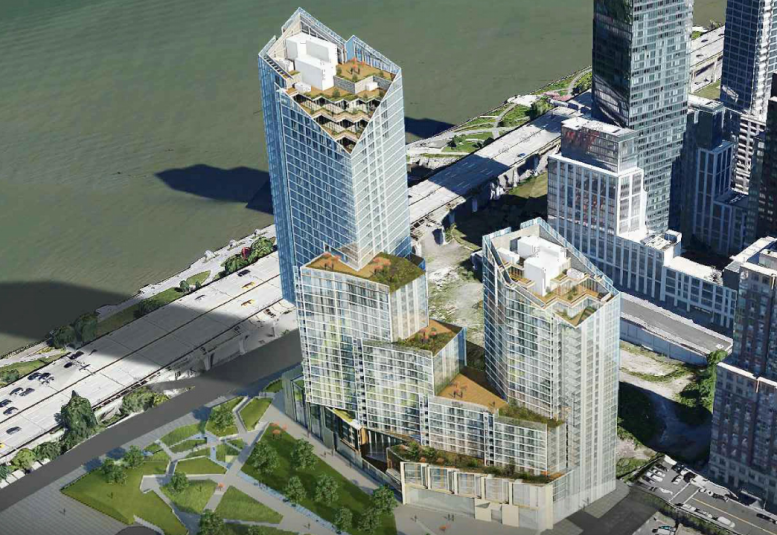 YIMBY recently brought you renderings of proposals for Building 1 of Riverside Center by Arquitectonica, and permits were subsequently filed for the parcel earlier this month. Now, we have the reveal for the project, which will be designed by Kohn Pedersen Fox. It sits on the northwestern corner of the greater Riverside Center development, next to West 61st Street and the West Side Highway.

GID Development is developing, and this parcel will contain two towers of commercial and residential use, the shorter standing 24 stories tall, and the taller rising 39 floors, sharing a common podium.

DOB permits list the project’s total size at 858,772 square feet, which includes 18,467 square feet of retail space. The residential component will be divided between 595 apartments, with rentals in the shorter tower, and condos in the taller building.

Riverside Center’s masterplan was created by Christian de Portzamparc, and while the individual buildings getting built are differing significantly in terms of cladding, they are conforming to the jagged envelopes projected in the renderings that passed through ULURP.

KPF’s take on the plan appears fairly similar to what was originally envisioned, in stark contrast to the other buildings revealed or under construction so far, at 1 and 21 West End Avenue. The latest rendering appears to have more in common with high-profile projects immediately to the south, and the uppermost levels of the towers will be sliced away, yielding extensive outdoor spaces.

While no completion date has been announced, both fresh permits and the new rendering are hopeful signals work will soon get underway.