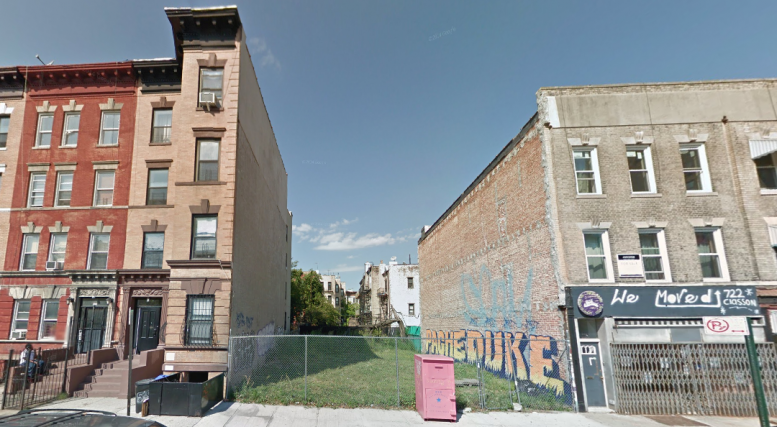 Empty lots are slowly disappearing in western Crown Heights, as developers snap them up for condo-worthy prices. One of these builders has filed plans to erect a five-story, eight-unit apartment building on the vacant plot at 529 Park Place, between Grand and Classon Avenues.

Those eight apartments would be spread across 8,801 square feet of residential space, for a spacious average unit of 1,100 square feet. Just like two of the buildings under construction a few blocks north on Bergen Street, these will probably be condos.

The first two floors will each have one half floor-unit, and a duplex will be split between them. The third and fourth stories will have two units each, topped by a single penthouse on the fifth floor.

The 50-foot-tall building will fill a 3,000-square-foot swath that was once home to two apartment buildings. But the former owner neglected the buildings and slid into foreclosure, and the city demolished both structures in 2008.

Issac and Stern will design the project, and the developer is Sterling Town Equities, headquartered on Fulton Street in Clinton Hill.

Development plans have been in the works for 529 Park Place since the spring of 2014, when the previous owners filed new building applications for a four-story building with ground floor commercial space. Zoning here allows retail, but Sterling Town decided not to include it.