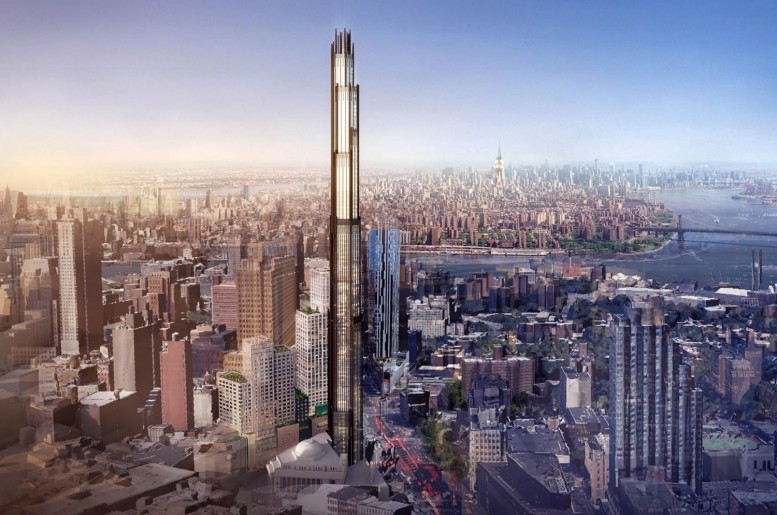 The first round of plans – filed back in the summer of 2014 – called for a 775-foot-tall development. Then in December, JDS scooped up the landmarked Dime Savings Bank at Dekalb Avenue and Fulton Street for $90 million. The bank’s 300,000 square feet of air rights pushed JDS’ tower beyond the 1,000-foot mark. And if all those development rights went to 340 Flatbush Avenue Extension, the tower could reach taller than the Empire State Building, a source told Crain’s.

Thanks to a new set of construction documents, we know that the 73-story tower will span 556,164 square feet, which is slightly larger than what YIMBY reported a year and a half ago. The residential portion has also grown from 446,734 to 463,470 square feet, but the number of apartments has dropped from 495 to 417.

The first four floors will have a mix of retail and office space, and a residential lounge with an outdoor terrace will fill the fifth floor. Apartments will begin on the seventh floor, with 12 units. The unit count will gradually decrease as the floors go up, finishing up with just two units apiece on the 69th and 70th stories.

The commercial portion has shrunk, and it will now occupy 92,694 square feet at the base of the tower. We don’t know whether the refurbished Dime Savings Bank is part of that total, but the 97,000-square-foot building will become retail and restaurant space. Mowbray & Uffinger designed the Neo-Classical structure at 9 Dekalb Avenue, which was built in 1908 and landmarked in 1994.

SHoP Architects is designing 340 Flatbush Avenue Extension, and YIMBY revealed the first rendering of the project in November. SHoP has already designed an iconic, skinny tower at 111 West 57th Street, and their Brooklyn supertall will undoubtedly define the Downtown Brooklyn skyline in the same way.

The DOB hasn’t approved permits yet, but construction is tentatively scheduled to wrap in 2019.