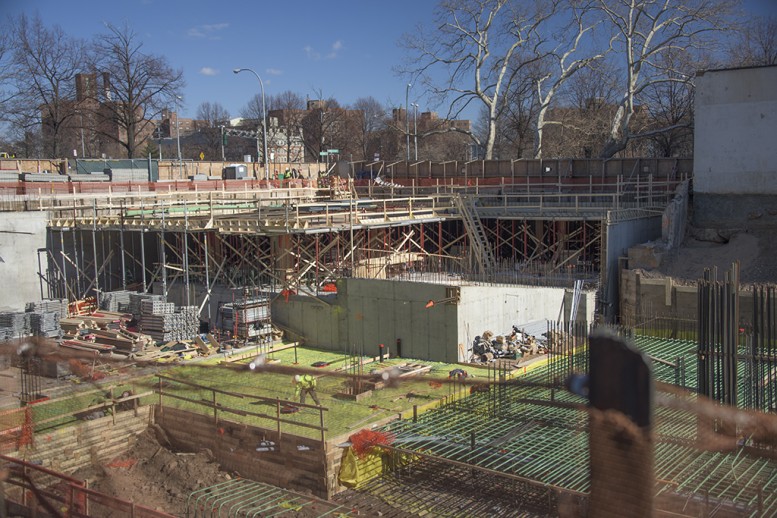 It was in July of 2014 that YIMBY brought you word of plans for the site of an office building at 199 Jay Street, at the corner of the small section of Nassau Street before the Manhattan Bridge ramps, in Downtown Brooklyn. A month later, we showed you a rendering of the project. Since then the existing building was demolished. Other than that, however, the project has barely pierced the ground, as seen in photos sent to us by our friend Tectonic, and it has a long way to go before it achieves its 33-story design. As for the actual building, the developer is listed as Thomas Aschimoneit of 203 Jay St Assoc. LLC, so it could end up being 203 Jay Street. Either way, it is being designed by Woods Baget. When we last reported on the project, the plan was for a 33-story, 425-foot-tall building and that has not changed. What has changed is the square footage and unit counts.

The initial filing called for a 290,420-square-foot development. The latest new building permit shows a smaller building, at 245,459 square feet. Residential space, however, has actually increased slightly from 230,355 square feet to 230,459 square feet. The number of units, though, has decreased form 381 to 270. So, the average unit size would be over 853 square feet.

Amenities for the residential tenants will include a 111- or 112-car below-ground parking garage, storage for 139 bicycles, a laundry facility, a fitness center, a “recreation room and lounge” on the third floor, and a lounge with a pantry on the 33rd floor.

The project was to have 58,309 square feet of commercial space, but that has been reduced to 13,246 square feet. The plan is for an 18-room hotel. No amenities are listed for the hotel.

There is also 1,744 square feet of community facility space planned. That will be on the first floor.

We don’t have completion date for you, but it’s fairly safe to assume it won’t be this year.