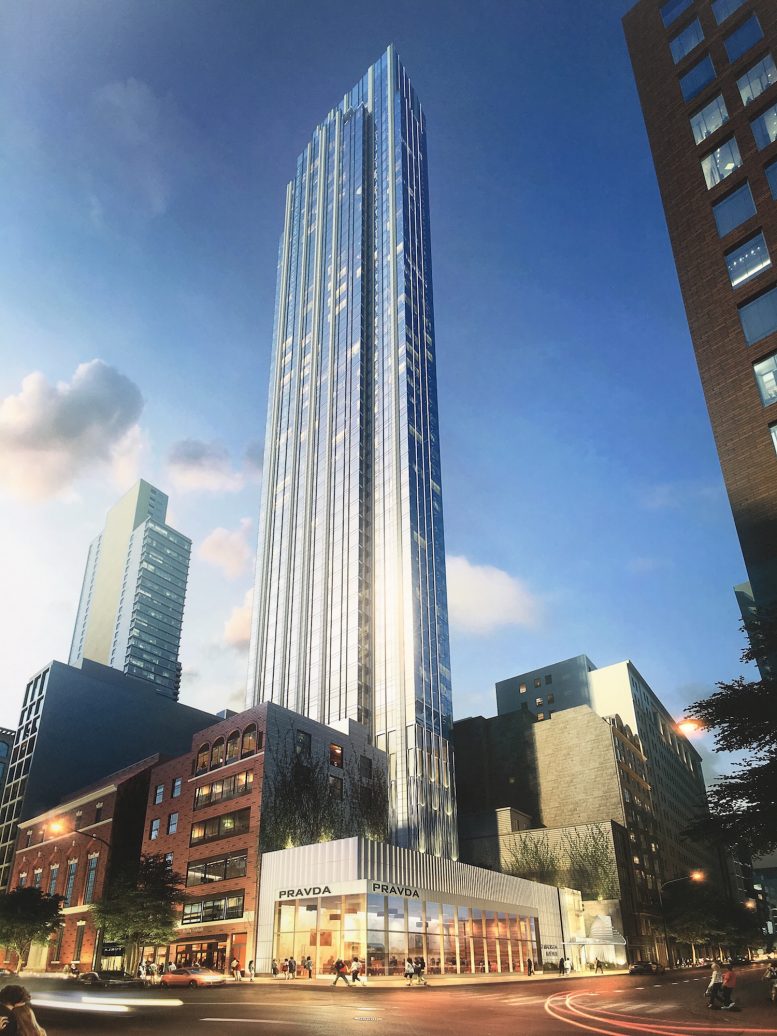 The latest building permits show that the tower will reach exactly 756 feet into the air, putting it in the ranks of Carnegie Hall Tower (757 feet) and City Spire Center (814 feet). The structure will eventually top out at 51 stories and span 360,000 square feet. 180 apartments will fill 295,970 square feet of residential space, for an average unit of 1,644 square feet. The ground floor will host 7,500 square feet of retail, divided between three storefronts.

J.D. Carlisle is co-developing the property with Shanghai-based Fosun Group. The Chinese firm is also renovating One Chase Manhattan Plaza and rebranding it 28 Liberty Street, after buying the imposing landmark office building for $725 million in 2013.

Handel Architects is designing 15 East 30th Street. The new rendering offers a look at the retail podium, which is emblazoned with “Pravda.” Coincidentally or not, Pravda was the name of a long-running Italian men’s clothing store in Midtown that closed a few years ago.

The tower will rise on an unusually shaped lot that fronts small parts of Madison Avenue and 30th and 31st Streets, and the retail portion will occupy the corner of 31st and Madison. The rest of the tower will be set back, with a courtyard squeezed in along 31st Street.

Carlisle picked up the four-building development site for $102 million in March of 2015.

The Department of Buildings just slapped the project with a stop work order, Crain’s reported on Tuesday. Condo owners across the street at the 55-story Sky House tower hired a planner to try and derail the project, because they didn’t want their views blocked by the lower floors of 15 East 30th. J.D. Carlisle and Fosun Group plan to build a 155-foot pedestal with mechanicals and retail, in an effort to raise the first floor of apartments above the roof line of the hotel next door.

While the DOB ruled that the mechanical floors were allowed under city rules, examiners did spot a small building code violation in the tower’s design. An “outer court” on the second floor is too small, failing to meet the DOB’s required 10-foot width for “small outdoor spaces,” according to Crain’s. Construction can’t resume until the development team works out a new design with DOB.

Signs posted on the construction site predict that the building will be complete in November 2019. The lot has been cleared, but excavation and construction have not yet begun.