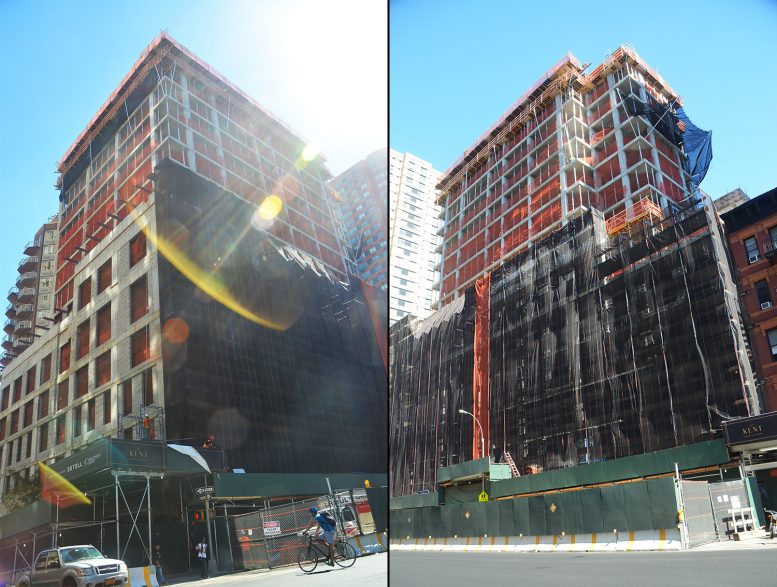 The Kent, at 200 East 95th Street. All photographs by the author

Last week, YIMBY brought you a construction update on developer Extell’s new Upper East Side condominium project, The Kent. Today, we have a look inside the building, which is still more than a year away from completion. The building is located at 200 East 95th Street. That’s at the southeast corner with Third Avenue, and it does occupy the address 1681 Third Avenue. Right now, the structure is about half of the way to its final, 30-story height. View of the RFK Bridge and East River

It doesn’t feel like much of anything yet, but one can get a glimpse of the views, which already include the East River, the Triboro Bridge (formally the RFK Bridge), Central Park, and the George Washington Bridge. Also already visible are some of the skyscrapers in Midtown, as well as One Court Square in Long Island City. When the upper floors are in place, residents should also be able to see the Hell Gate Bridge and Bronx-Whitestone Bridge. That’s at least four bridges on which New York City bridge master Othmar Ammann worked. View towards Midtown from the 14th floor There will be 83 residences, ranging from two- to five-bedrooms and from 1,285 to over 5,000 square feet. At $2.574 million to $9.145 million, Extell is aware that this is bringing a new price point to the neighborhood. Extell’s JP Forbes even uses the tagline “Bringing Park to Third” to sell the project. However, it has been mitigated somewhat by the fact that the project was started before the 421-a tax abatement expired. Forbes told YIMBY that they saved up to $250 per square foot. He’s hopeful that an agreement will be reached to renew the program. Rendering of the entrance Rendering of the lobby Rendering of a living room Rendering of a kitchen Rendering of a bathroom

The building’s design is the work of Beyer Blinder Belle and the interiors will be by Alexandra Champalimaud, who has worked on the Waldorf-Astoria Hotel. There will be 10-to-150-foot ceilings, and some of the windows are so large that the construction elevators had to be extra large to accommodate them. A large window opening on the eighth floor of The Kent, 200 East 95th Street

Among the amenities will be a “Sound Lounge,” designed by rocker Lenny Kravitz, where residents can practice, or even hold an intimate concert. “The Sound Lounge at The Kent was inspired by one of my personal recording studios,” said Kravitz. “We wanted to create an inviting and inspiring multipurpose environment where the residents can play music together or practice their instruments.” Rendering of the Sound Lounge at The Kent, 200 East 95th Street Rendering of the screening room at The Kent, 200 East 95th Street

That room is right off the screening room, which has multiple screens. Other amenities include a children’s playroom, Finnish saunas with changing rooms, a fitness center, heated swimming pool, two adult lounges (including one with a billiards table), and a courtyard designed by West8 Landscape Architects. Rendering of the children’s playroom Rendering of the lobby lounge

Rendering of the terrace lounge

The Kent joins other high-profile projects under development in the area, including DDG’s 32-story, 48-unit 180 East 88th Street and Anbau’s 34-story, 84-unit Citizen360 at 360 East 89th Street. The Kent will also contain 14,000 square feet of retail space, and should be complete by the fourth quarter of 2017.

1 Comment on "Touring the Kent, Condos Under Construction at 200 East 95th Street on the Upper East Side"