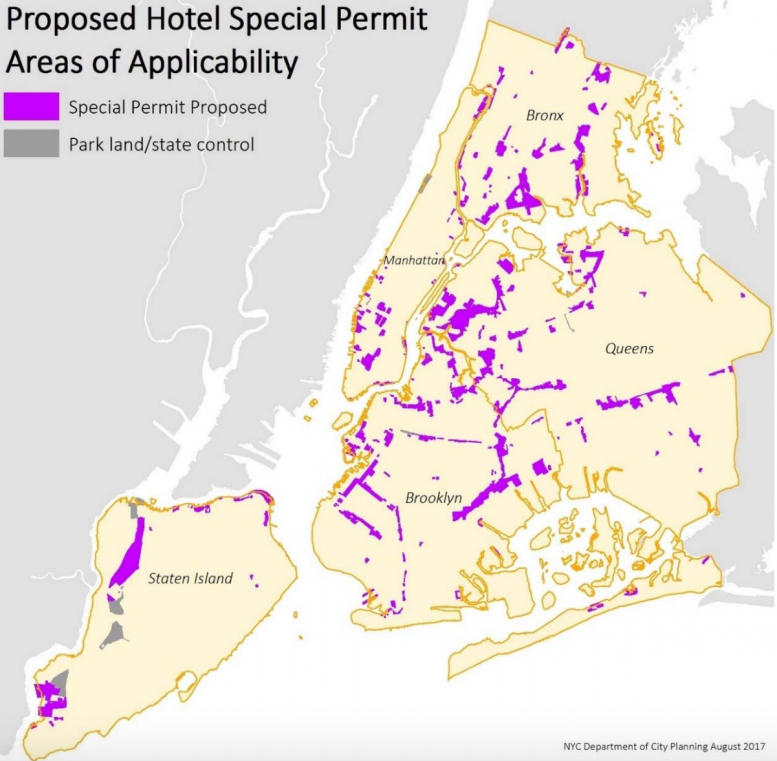 Within the 84 pages of documentation behind the rezoning’s EIS, the most compelling evidence supportive of the changes are the current statistics about the city’s hotel developments. Buildings already in the pipeline would constitute a 32% increase in overall supply when delivered, boosting the number of rooms from 2016’s total of 116,000 to 154,000 by 2028. As the City describes,

[In] 2016, the City received 60.7 million visitors, an increase of nearly 30 percent over the previous nine years. According to current figures, there are over 600 hotels across the five boroughs with nearly 116,000 hotel rooms between them.

In the rezoning materials, the City then projects estimated demand for hotel rooms come 2028. According to these figures, the current boom will yield a surplus of over 9,000 rooms by that year, with the supply now coming online set to completely overwhelm the pent-up demand that has resulted in the ongoing surge of new construction. Moreover,

[Not] all rooms currently in the pre-construction pipeline are accounted for in the N-Action condition or would be completed by the 2028 build year.

While the City’s numbers will be prone to errors, the sheer realized and impending percentage increase in hotel rooms is astounding. From 2010 to 2028, the city will have added over 50% to its total room inventory, at the same time that websites like AirBnB have led to a rise in room-renting services, with tens of thousands of unofficial rooms also joining as soft inventory.

Tourism remains a strongpoint in New York City’s economy, but the city is likely correct in its assertion that hotels in M-1 zones need to be planned more carefully. In fact, the surplus analysis conducted by the city points to another phenomenon that is also probably going to gain more headlines in the next few years.

With so many rooms opening, and increasing competition from AirBnB and others, the per-key price in New York City is likely to drop substantially. This will be good news for tourists, and hopefully tourism overall, but its impact on the multitude of new hotels in peripheral neighborhoods is likely to be somewhat less rosy, with conversions into homeless shelters having already begun in places like Maspeth. As noted by the City,

Hotel clustering in M1 districts in boroughs other than Manhattan is noteworthy. Over 75 percent of the hotel rooms built in M1 districts outside Manhattan in the past ten years are located in just four clusters, excluding JFK Airport. These M1 hotel clusters are 1) Long Island City (Queens), 2) Jamaica (Queens), 3) North Brooklyn and 4) Gowanus (Brooklyn).

As the data supporting the zoning amendment makes clear, the situation for hotels is going to become rather dire by the end of the 2020s. With conversions already occurring in places like Maspeth, and the city renting out rooms to the homeless in prime neighborhoods across Manhattan, other examples are likely to follow. As room prices continue a general downward trend over the next several years, the homeless crisis only seems to keep getting worse.

In no uncertain terms, this actually does an excellent job of proving the point that new development is not necessarily bad for overall pricing, if enough new stock is built in a sufficient time period. It would be quite impossible for New York City’s residential housing inventory to increase by over fifty percent in only eighteen years, but as the hotel market closes in on accomplishing this incredible feat, prices are plummeting precisely because of all the new square supply. The five boroughs are not immune from the laws of economics.

Unfortunately, the overbuilding is also going to result in some nasty political battles over the next few years, as illustrated in the happenings that have already enraged the residents of Maspeth. The impending rezoning may actually do little to assist in this regard, and there is a specific exclusion to the proposed special permitting process that addresses hotels meant to house the homeless:

Transient hotels operated for a public purpose by the City of New York or organizations under contract with City will be exempt from the special permit requirement. Hotels operated for public purpose are primarily used to provide temporary housing assistance, or shelter, to homeless individuals and families. It is a legal obligation of the City to provide shelter to all eligible persons within the five boroughs, and the City must maintain the existing flexibility in zoning that permits temporary housing for the homeless in all M1 districts to ensure it has sufficient capacity to meet census demand for temporary accommodations. This is in line with the Administration’s recently-released plan to address homelessness in the City, called “Turning the Tide,” which involves a borough-based approach to shelter siting, as the City seeks to end shelter programs in cluster apartments and commercial hotels (NYC Office of the Mayor, 2017b).

The picture provided by the proposed text amendment is very nuanced, and may actually do little to stem the tide of hotel-to-homeless shelter conversions. But while the horse may already be out of the barn when it comes to this issue, the amendment should do a decent job of ensuring that the construction of new hotels in neighborhoods like Chelsea and the Garment District can be done in a substantially more urban-friendly way. With special reviews possibly imminent, Kaufman’s streetwall-breaking monsters may finally stop proliferating. 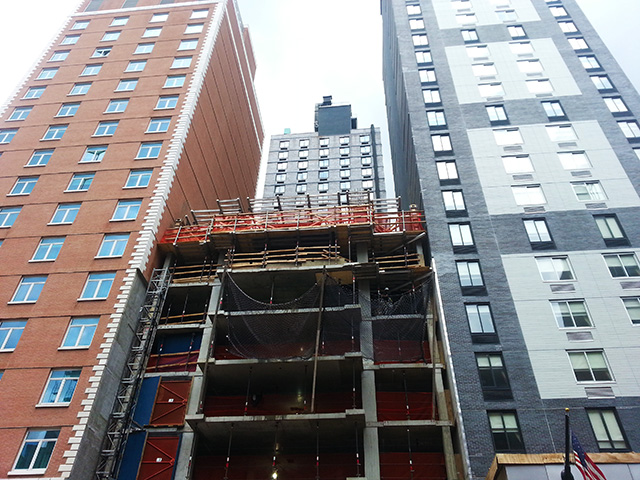 The final scope of work for the special permit is still pending, and as specified in the preliminary outline, members of the public are currently welcome to submit input. There will also be a hearing, on October 26th.

The public, interested agencies, Community Boards, and elected officials are invited to comment on the Draft Scope, either in writing or orally, at a public scoping meeting to be held on Thursday, October 26th at Spector Hall, 22 Reade Street, New York, New York 10007, starting at 2:00pm. Comments received during the Draft Scope’s public hearing and written comments received until 5:00 pm on Monday, November 6th, 2017, will be considered and incorporated as appropriate into the Final Scope of Work (Final Scope)