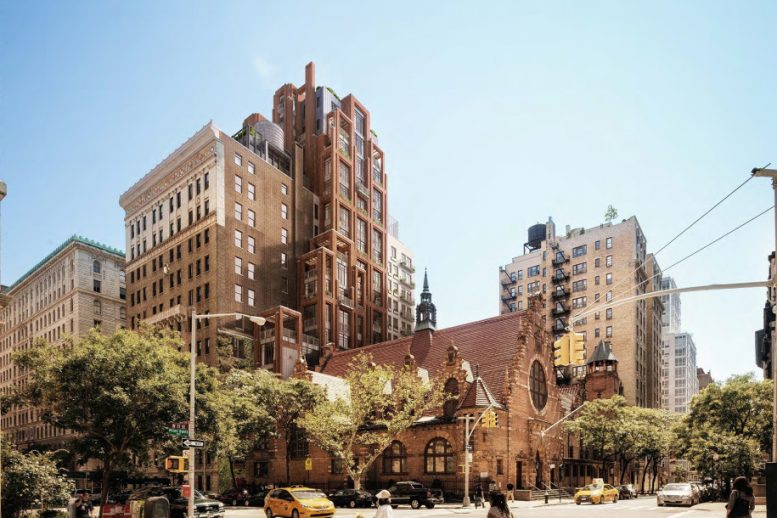 Alchemy Properties, alongside Daishin Securities, successfully acquired the site of 378 West End Avenue for $158 million last week, which will eventually become the home of a ground-up 19 story condominium building on the Upper West Side of Manhattan. It will be combined with a new 12-story structure, in conjunction with landmarks approvals, to be built at 260-262 West 78th Street, the former location of The Collegiate School.

The site is located at the southeast corner of West 78th Street and West End Avenue, only one block away from the 1 Train sitting to the east along Broadway. COOKFOX is the architect and the designer of the exterior and interiors.

The exterior of the new proposed building shows a warm tone of brown-colored bricks that will blend with the surrounding structures, which are set to undergo facade renovations and refurbishments as part of the project. Tall industrial-style windows make up the openings, with space for private balconies that overlook the site of the church down below. The main facade along West 78th Street runs right up to the adjacent structure, with a grid of tight windows and minor setbacks towards the top creating a multi-level crown with private terraces and open-air voids in the corners.

Kenneth Horn, Founder and President of Alchemy Properties, had this to say about 378 West End Avenue:

“We are excited to expand our work on the Upper West Side and build on the success of Two Fifty West 81st Street. 378 West End Avenue is a winning combination for buyers: a new building with a robust amenity offering located in a beautiful and historic district.”

Bank OZK is in charge of providing pre-construction and construction financing for both sites. Alchemy Properties is also known for being the developer of the Woolworth Tower Residences and Two Fifty West 81st Street.

Construction is expected to start during the third quarter of 2018. An extensive look at the planning of this project can be found in this previous YIMBY article.