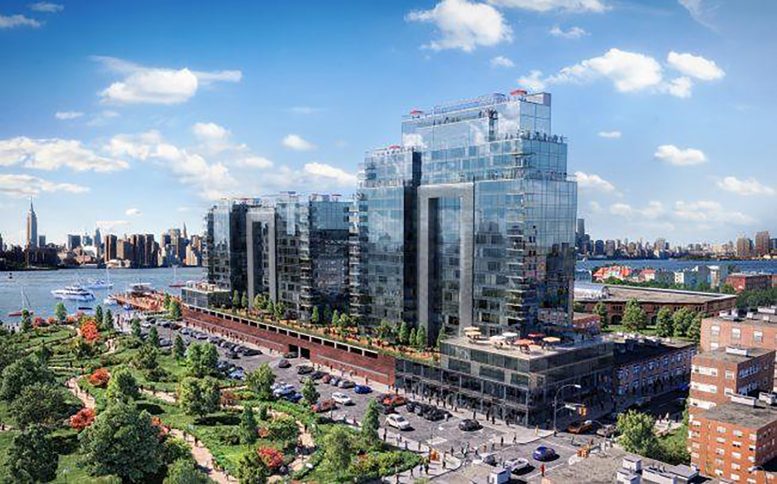 New permits have been filed for a 14-story residential building at 53 Huron Street, in Greenpoint, Brooklyn. Also known as 161 West Street, the proposed development is located on the Brooklyn waterfront four blocks north of WNYC Transmitter Park. It is steps away from Greenpoint landing on the NYC ferry system, and six blocks west of the Greenpoint Avenue subway station, serviced by the G train. London-based private equity firm Quadrum Global is responsible for the application.

The project yields a total of 278,005 square feet, with 178,000 square feet allocated to 173 residential units. These will most likely be condos due to the average scope of 1,028 square feet. Plans for the 150-foot tall building also include 86 off-street parking spaces. Morris Adjmi Architects is leading the design, which may have changed since renderings were first revealed back in 2017.

According to The Real Deal, Quadrum Global gained ownership of the site for $45.5 million. It was previously owned by Miriam Chan, a Brooklyn-based investor that purchased the site in 2004 for $13 million.

5 Comments on "Permits Filed for 173-Unit Project at 53 Huron Street in Greenpoint, Brooklyn"