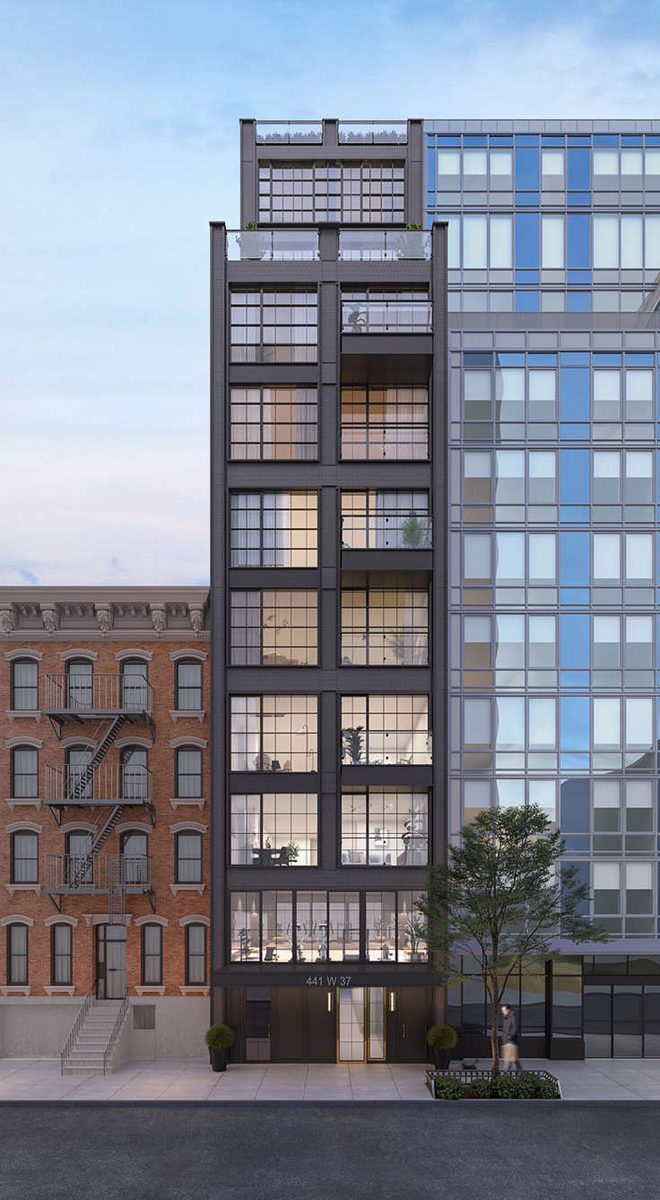 Construction is progressing on The Westerly, an 11-story mixed-use building at 441 West 37th Street in Midtown, Manhattan. Designed by DLJU Architects and developed by Happy Living Development, the project is located between Ninth and Tenth Avenues and will yield full-floor two-bedroom units designed by Adele Schachner Architecture + Interiors. Prices for the homes will start at $1.7 million.

Photos show the exterior progress since our last update back in early March, when the building was nearing topping out. Though scaffolding, wooden boards, and netting covers most of the main southern façade, the building is still visible and appears to have all of its windows in place. Work is still progressing on the balconies, whose floors have been formed and are awaiting installation of railings. The mostly blank western wall that rises above the abutting neighbor seems to be finished. The most recent renderings show the building clad in a dark metal façade with floor-to-ceiling industrial-style windows. This final exterior treatment will likely begin to be installed over the coming months. 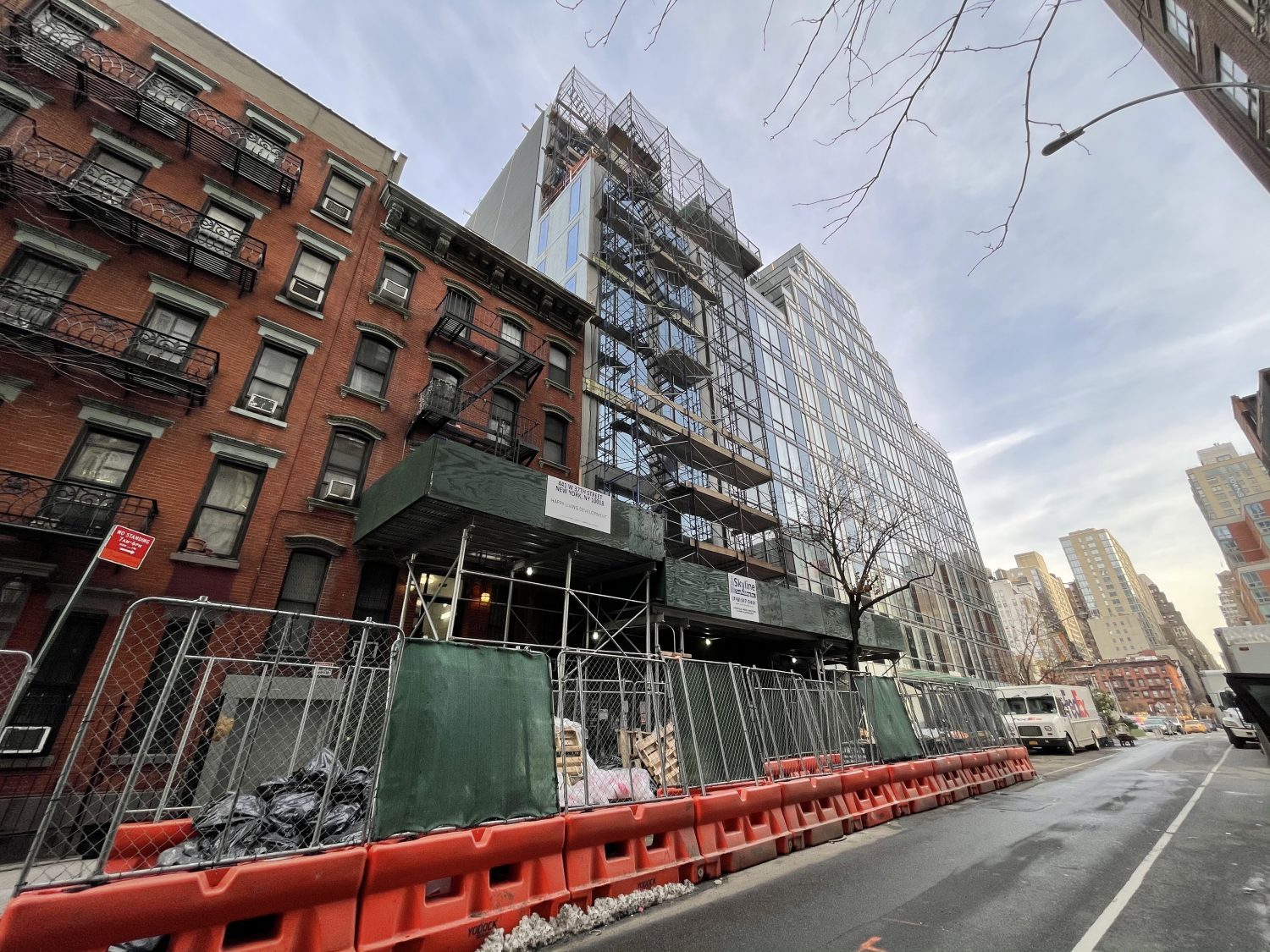 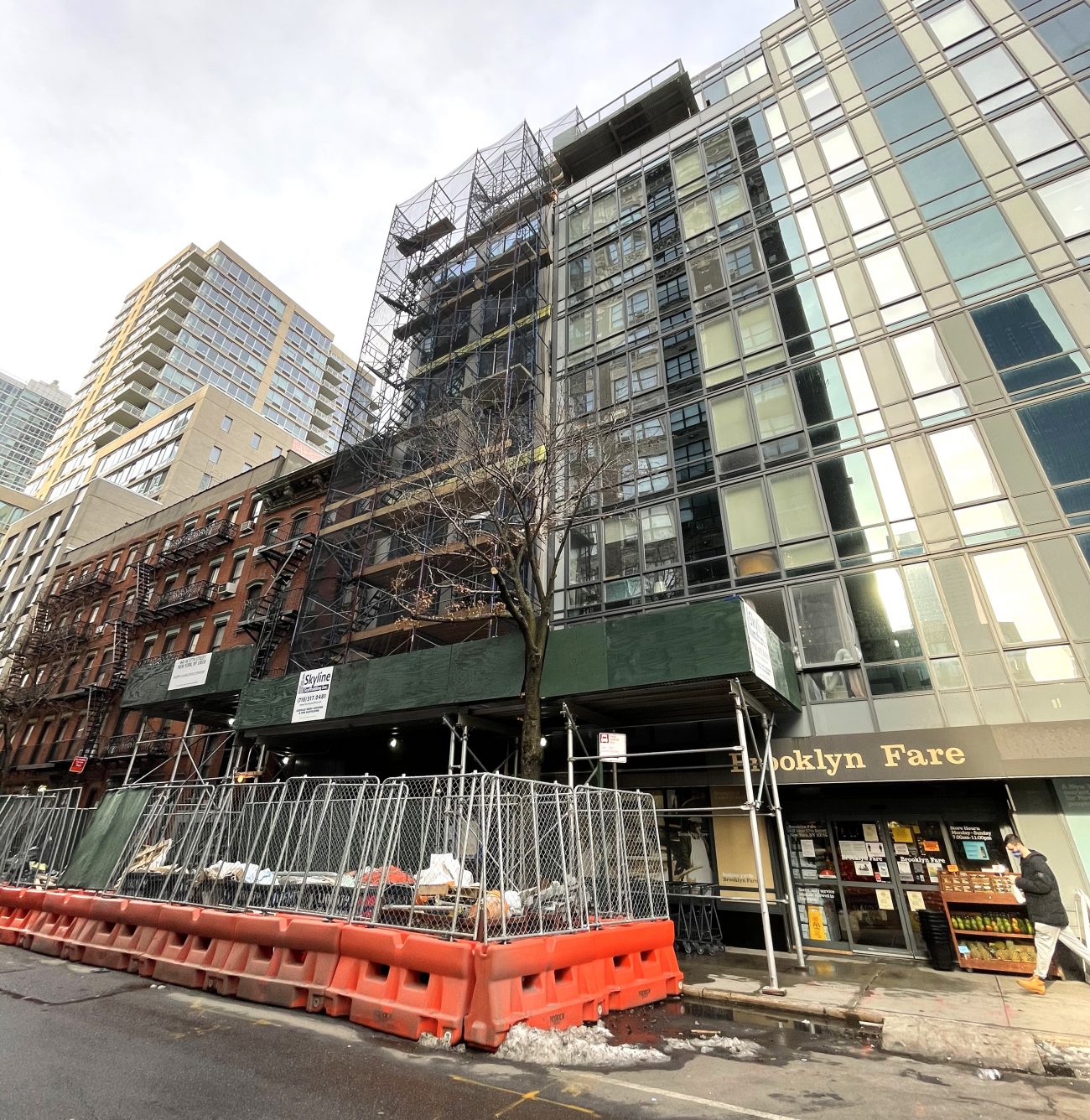 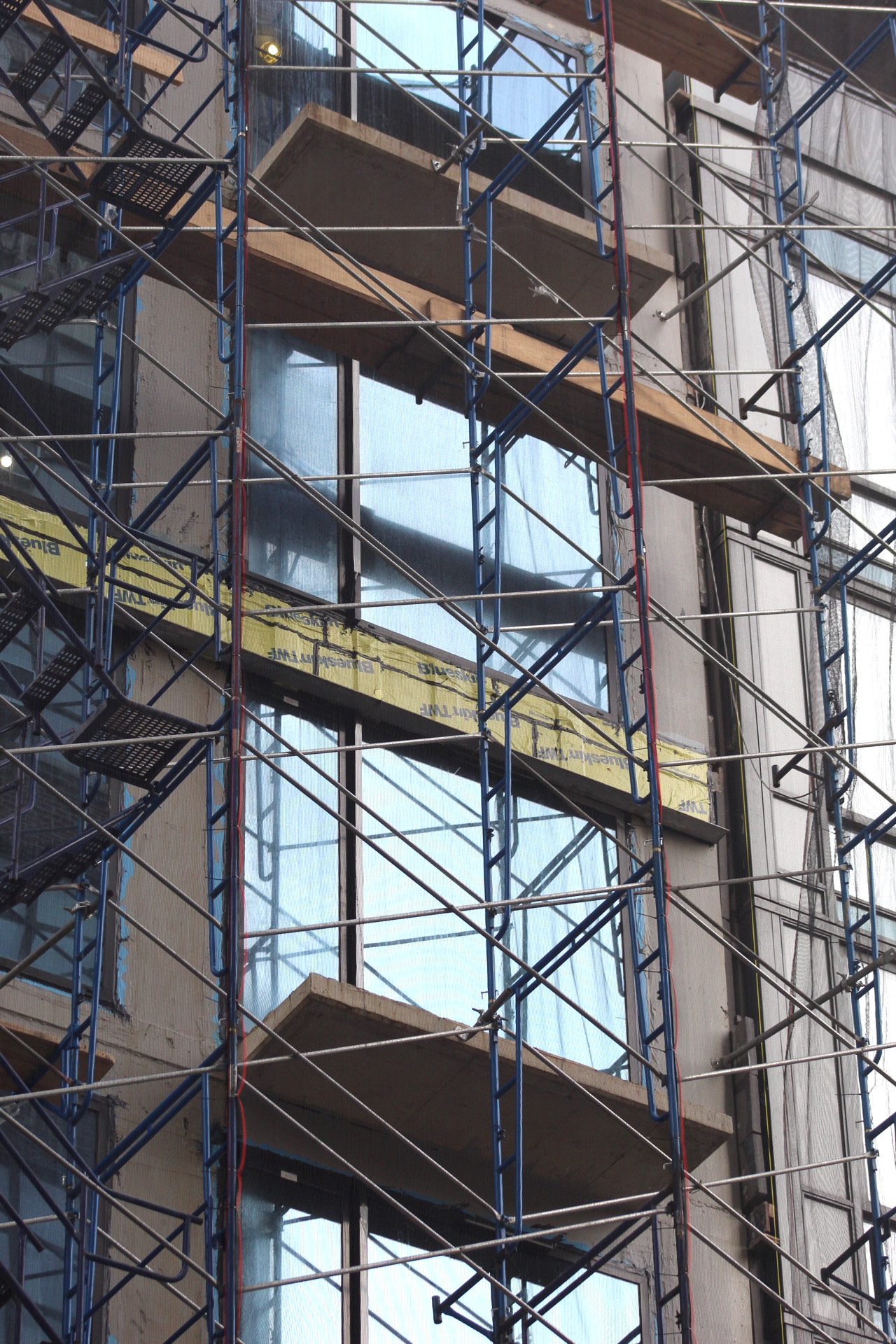 An earlier iteration of 441 West 37th Street, below, featured a much more lively architectural design. The plans have since been revised to a much simpler and more contextually fitting form. 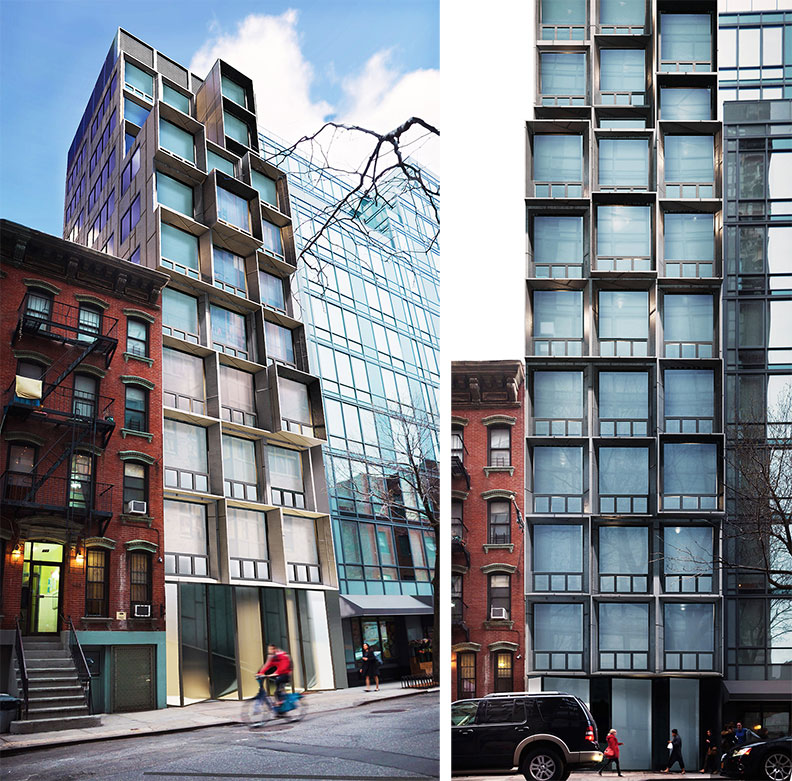 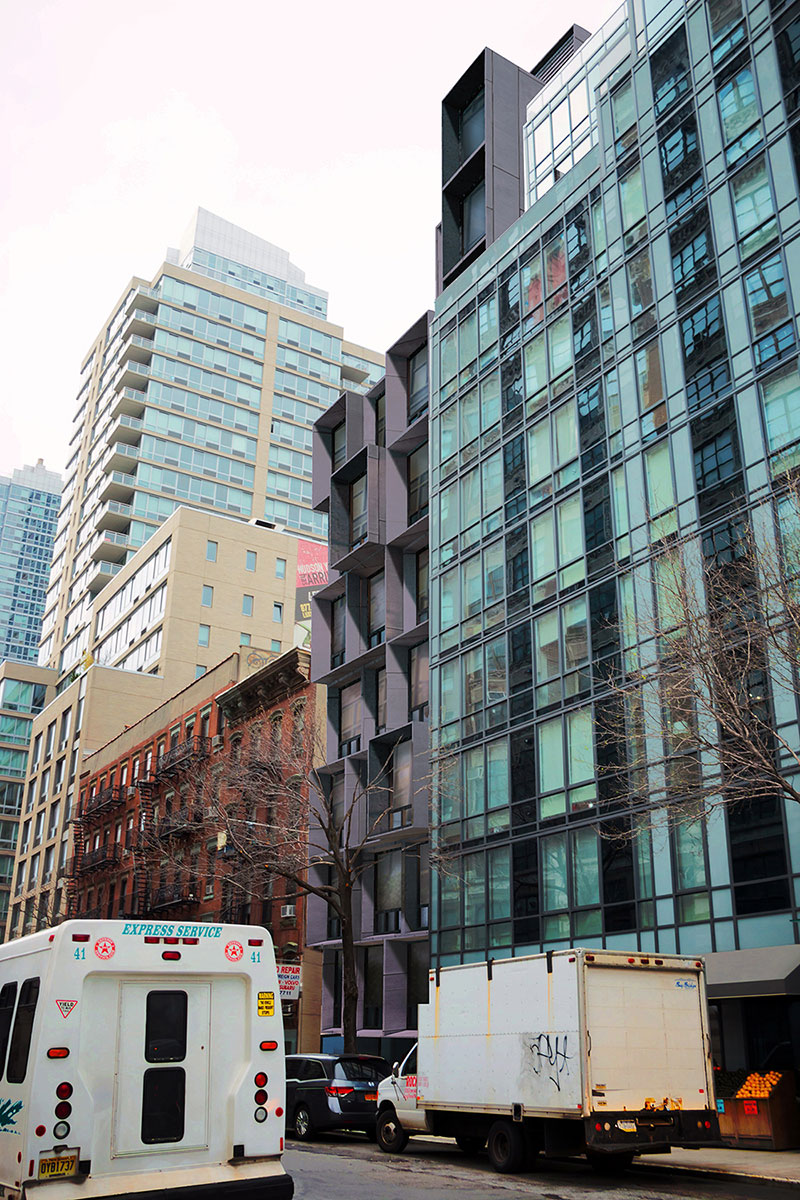 YIMBY last reported that the property will contain 2,500 square feet of ground-floor retail. Amenities for residents include a shared rooftop terrace, bike storage, and a fitness center. The closest subway is the 7 train at Hudson Yards between Tenth and Eleventh Avenues. The A, C, E, NJ Transit, Long Island Railroad, and Amtrak trains are also nearby at Pennsylvania Station.

A completion date for 441 West 37th Street is unclear, but sometime in the latter half of 2021 is a plausible target.

4 Comments on "Façade Work Progresses on The Westerly at 441 West 37th Street in Midtown, Manhattan"