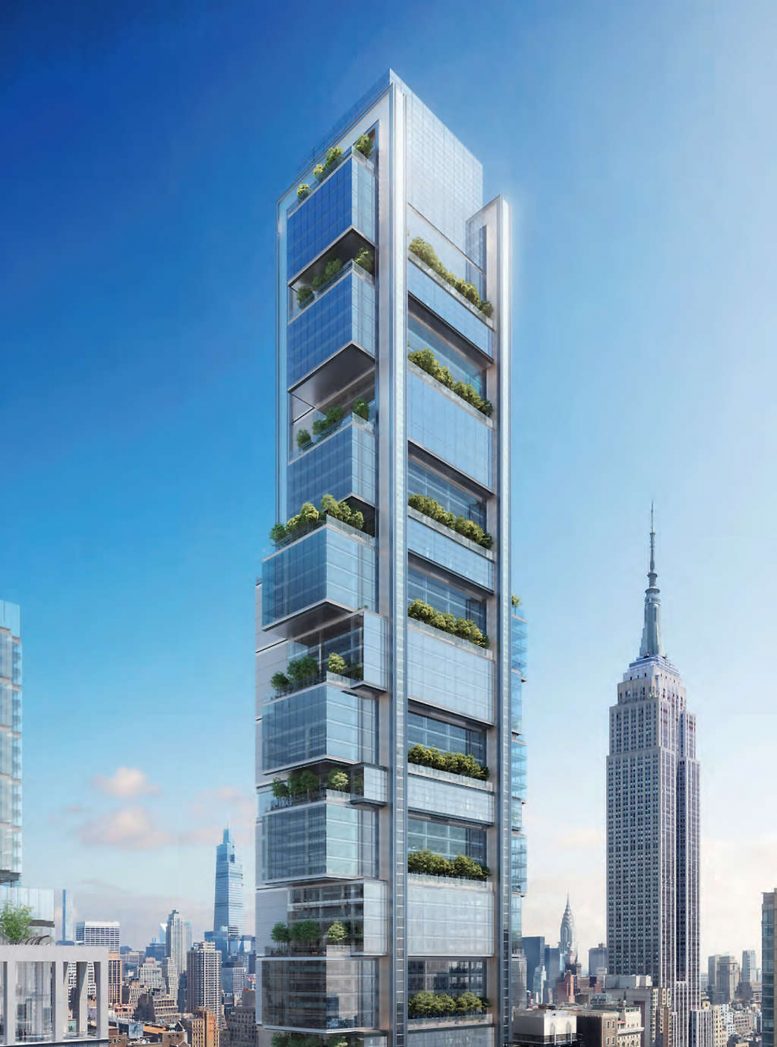 A new set of renderings has been released for Vornado Realty Trust‘s 7.4-million-square-foot Penn District redevelopment in Midtown. Created by DBOX, the images highlight Penn 15, a 1,270-foot supertall designed by Foster + Partners at 15 Penn Plaza. The overall plan aims to transform and revitalize the cityscape between Sixth and Seventh Avenues and West 32nd and West 34th Streets with a total of eight new skyscrapers surrounding the 109-year-old James A. Farley Building and Skidmore Owings & Merrill‘s newly opened Moynihan Train Hall, as well as One and Two Penn Plaza and Madison Square Garden. 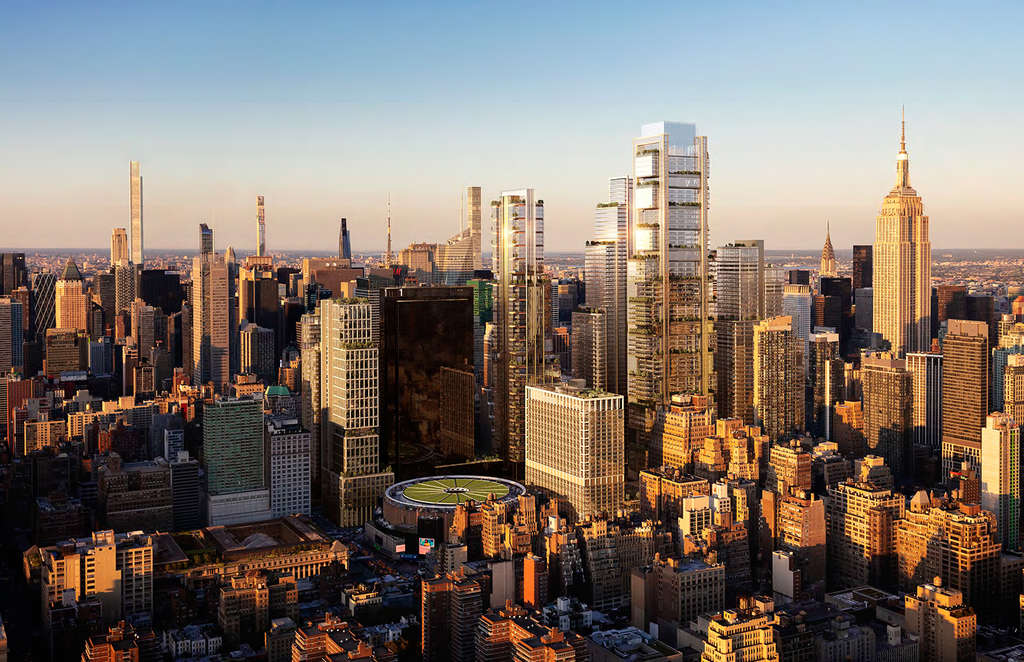 A mix of office, hotel, retail, outdoor public space, and much needed upgrades to transportation services would span all of Penn District. 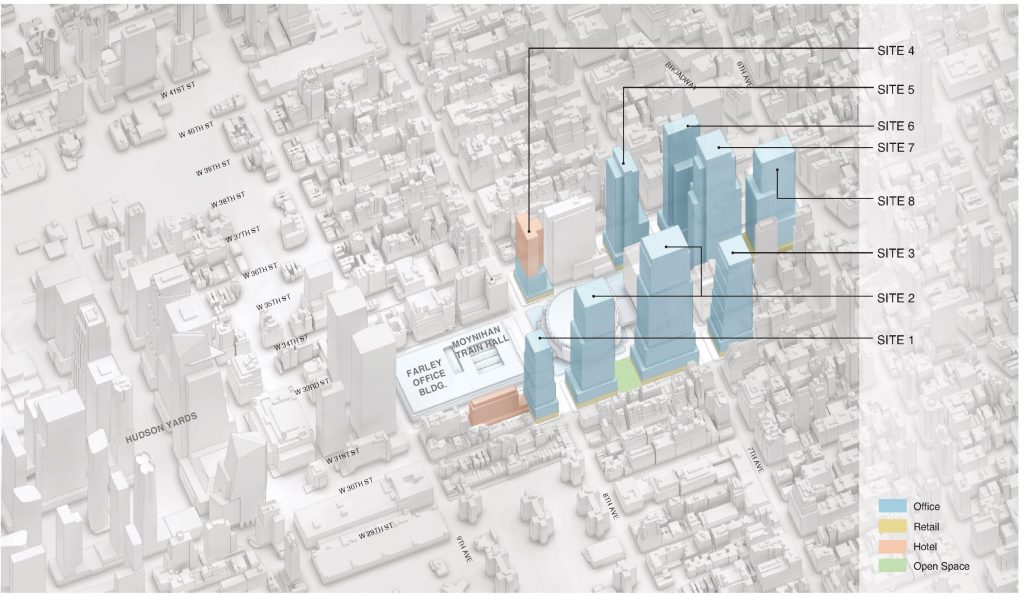 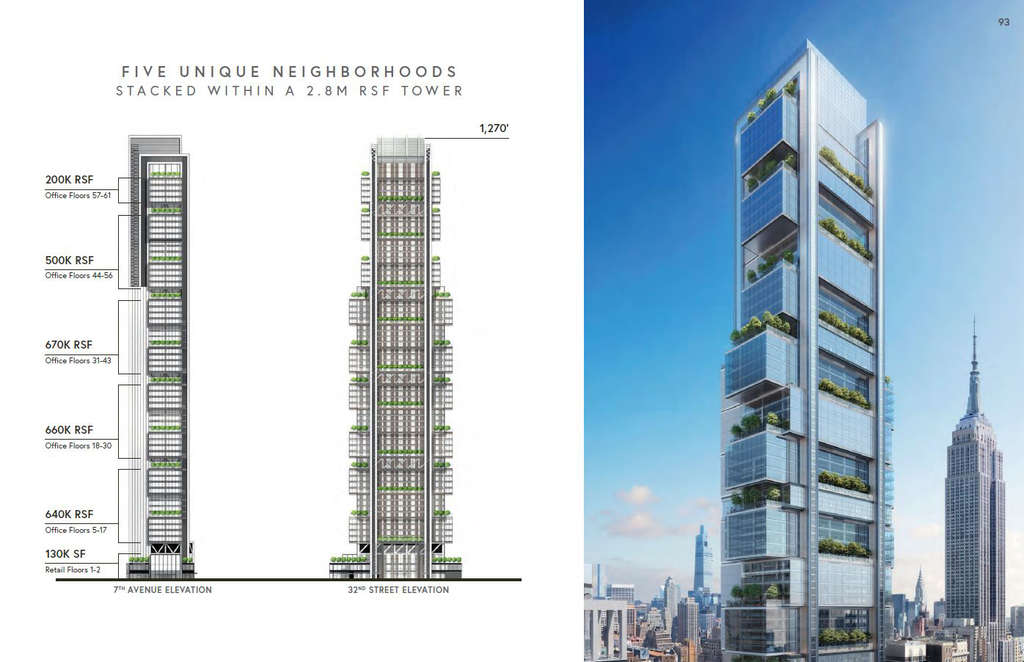 The next diagram below shows how the architectural design came to be, with the core first being offset to the north side of the building’s footprint for higher flexibility in leasing office space and daylight exposure, followed by the grouping of every 12 floors into five distinct vertically stacked blocks, which are then staggered and laterally shifted to create numerous cantilevering landscaped outdoor terraces. 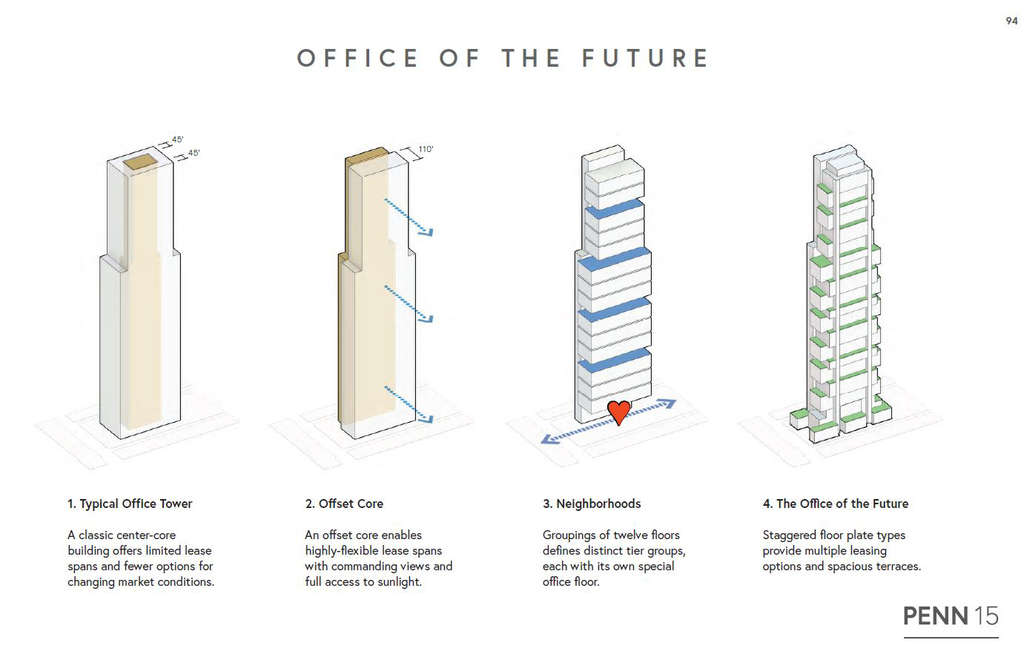 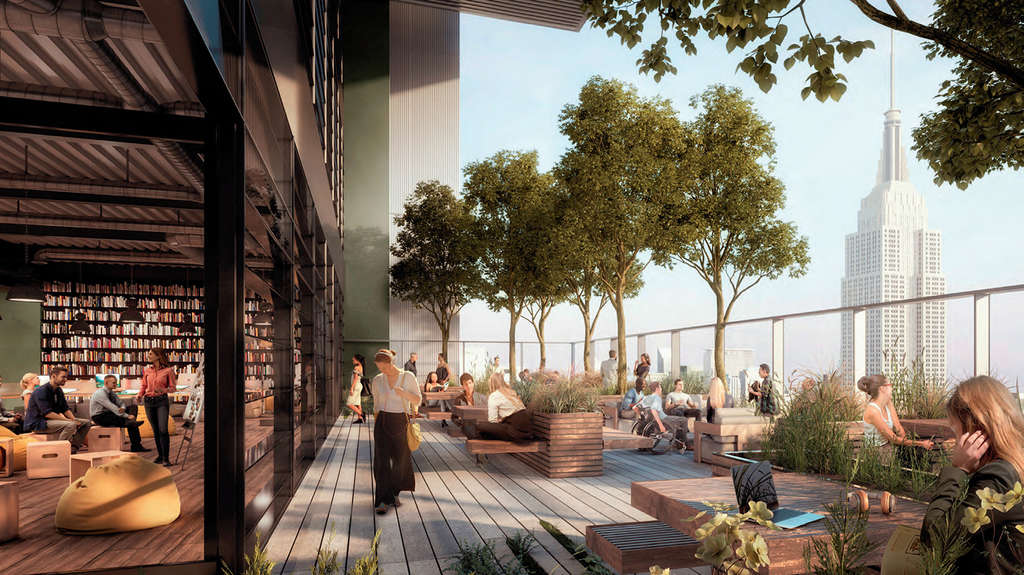 Two thin parallel vertical columns near the northern and southern ends of each elevation wrap over the top of the roof parapet, giving the impression of binding the rectangular blocks. Floor-to-ceiling glass makes up the majority of the façade, while the crown appears to be covered in metal grilles hiding extended mechanical units. A final set of outdoor terraces rests behind a tall multi-story wall of glass. 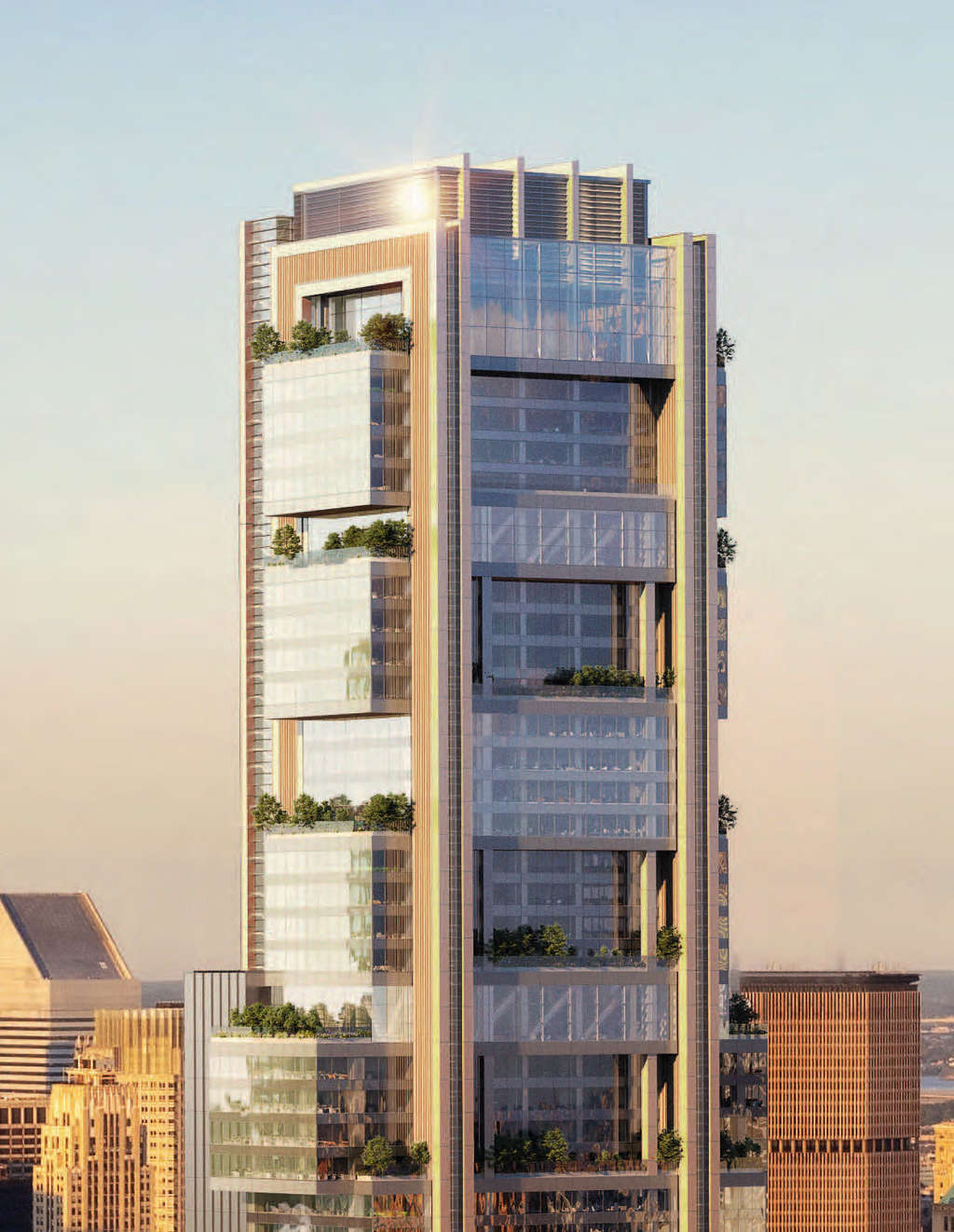 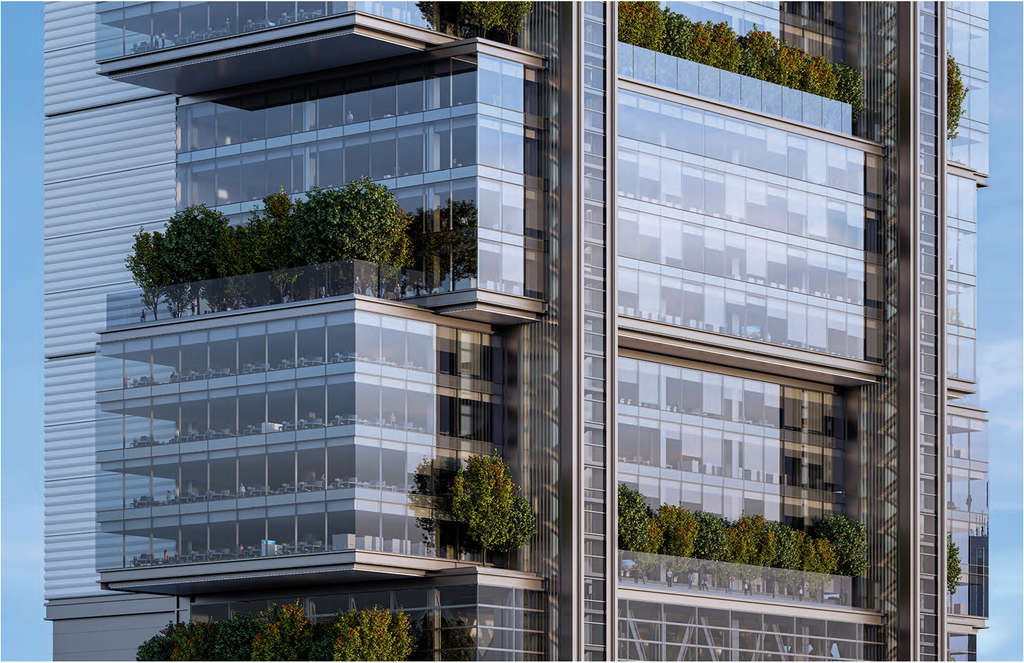 A night time street level and main lobby rendering below show the presence and scale of Penn 15. 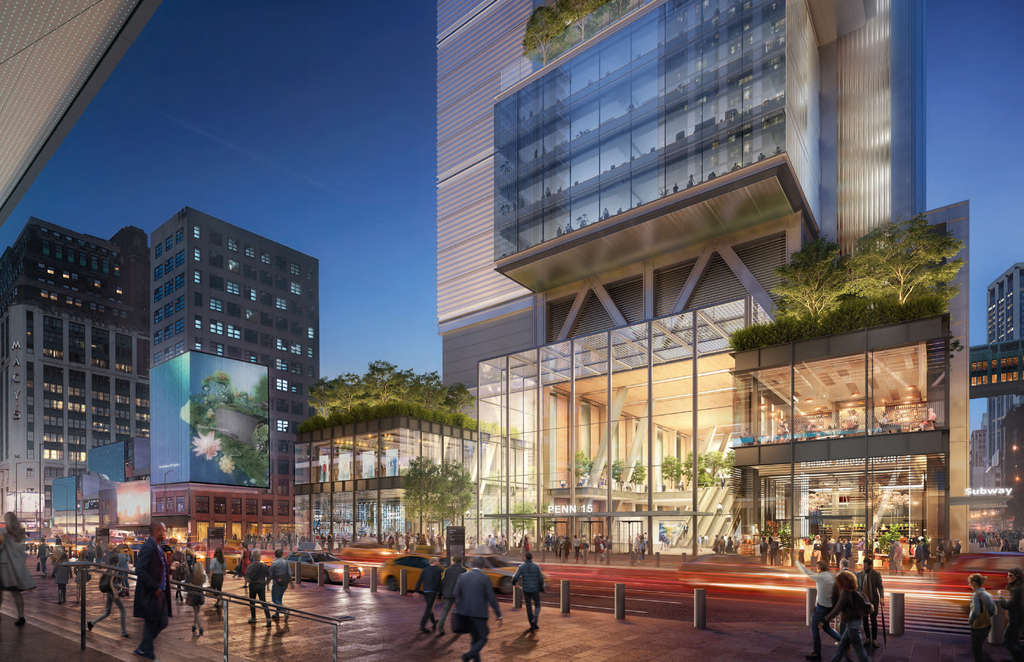 Looking across the street at Penn 15, designed by Foster + Partners. Rendering by DBOX. 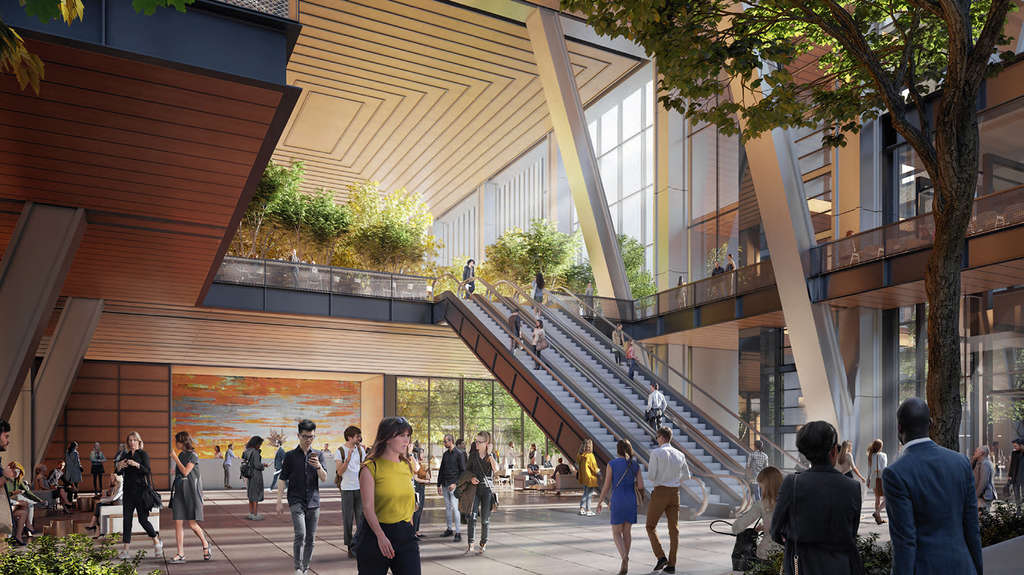 The main lobby of Penn 15, designed by Foster + Partners.

A construction timeline and completion date for the entire Penn District have not been finalized, though activity will likely not begin until sometime later this decade, with a completion date some time in the 2030s. Going in tandem with this huge undertaking would be the relocation of Madison Square Garden to its proposed new home closer to Herald Square. If fully realized, the master plan would dramatically alter the skyline between the iconic Empire State Building to the east and both Manhattan West and Hudson Yards to the west, forming a grand corridor of some of New York’s tallest structures.