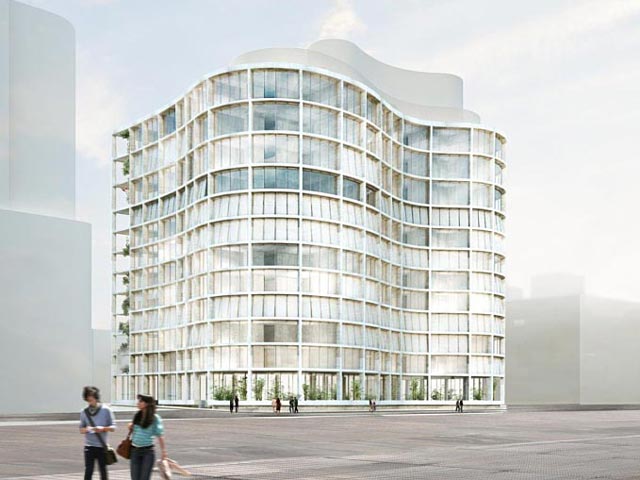 YIMBY has the reveal for the Herzog & de Meuron-designed 357 West Street, courtesy of a tipster; the building is the firm’s second Manhattan project to be unveiled in as many months, and both sites are being developed by Ian Schrager. While permits are lacking, the insider notes the building will have 88 condominiums, which will undoubtedly be priced astronomically. The building will stand 12 stories tall, and while the height is relatively short, 357 West Street will be located across from the Hudson River, guaranteeing permanent visibility. Previously disapproved permits listed the scope at 141,500 square feet, which would translate into an average of over 1,600 square feet per unit.

Given the site’s location in the West Village, the potential at 357 West Street would seem to exceed that of 215 Chrystie. While Pier 40 may be somewhat of an eyesore, NIMBYs have killed efforts to save the ailing structure, and it may soon sink into the Hudson River, leaving Schrager’s project with even better views. Herzog & de Meuron’s latest work is another pleasant departure from typical contemporary architecture. The building spans through the block, and its swooping form will contribute to both the skyline and the streetscape, given the expanded sidewalk along West Street. While facade specifics remain speculative, the exterior appears to be concrete, echoing both 215 Chrystie and 56 Leonard. The concrete facade has the potential for iconic status, and the material is gaining traction in New York City as many new developments — ranging from 57th Street supertalls to boutique mid-rises along The High Line — are now utilizing its brutal elegance. Slanted inset windows will distinguish 357 West Street from the other projects, with the building’s overall look appearing to draw from Marina City in Chicago — though Herzog & de Meuron’s take on Bertrand Goldberg’s classic is decidedly more human-scaled. No completion date for 357 West Street has been formally announced, but given the development’s journey through the Board of Standards and Appeals, construction would appear to be on the near-horizon, and the tipster notes 2017 as the likely opening date.

Talk about 357 West Street on the YIMBY Forums