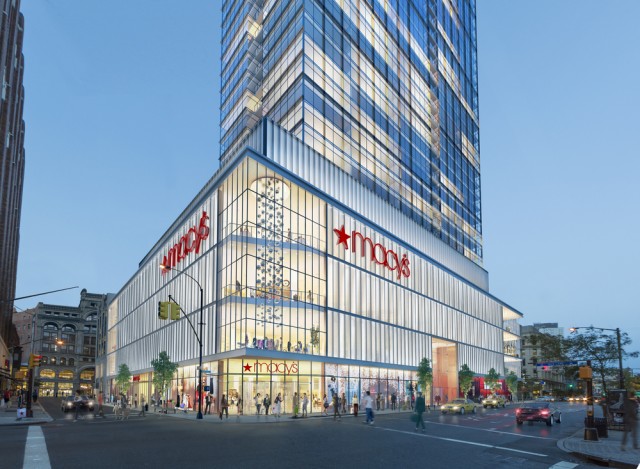 Late last year, Racked reported that Macy’s was rethinking its future in Downtown Brooklyn, with the company considering the addition of a second location, and the potential sale of both its current building and a parking garage next door.

Now, YIMBY has the first reveal of potential plans for the old garage at 11 Hoyt Street (and a neighboring structure at 450-458 Fulton Street), which may be reborn as 217 Livingston Street. Per a piece by The Real Deal last August, the garage comes with 584,000 square feet of air rights, and Macy’s is also requesting that any developer build a 300,000 square foot store.

The images come from a proposal by Brookfield, which is apparently in contention for the purchase of the site, though representatives did not respond to YIMBY’s request for comment. Beyer Blinder Belle is behind the design.

While plans are far from final, Brookfield’s vision looks to depict the refurbishment of the existing garage into a major expansion for Macy’s, likely fulfilling the demand for 300,000 square feet of retail. Besides re-using the old garage, a very tall and glassy residential tower is also featured in the images, though its entire height is not apparent. The old 450-458 Fulton Street and possible plan for the building, image by Beyer Blinder Belle/Brookfield

Also of importance is the integration of the old A.I. Namm & Son Department Store into the new project. Located at 450-458 Fulton Street, Brookfield’s plan would expand Macy’s into its base, though signage would be much more prominent on Livingston Street.

Land records indicate that the Macy’s assemblages remain on the market, and per The Real Deal’s report, the garage at 11 Hoyt Street may present a tricky sale. Confusingly, a separate owner from Macy’s — Crown Acquisitions — actually owns several small parcels underneath the existing parking garage, which means that any buyer must deal with demands from both sellers. Regardless of its challenges, the site will eventually be redeveloped, as the land’s value continues to increase. Several new buildings are rising nearby, including the massive City Point project, and land values in the Fulton Street Corridor are increasing too quickly for the garage to remain standing as-is for much longer.

With 11 Hoyt’s transformation into a new Macy’s, an entire city block will be revitalized with both retail space and new apartments, pushing Downtown Brooklyn’s renaissance even farther along. But for the moment, no plan has been selected, and 217 Livingston Street remains in limbo.