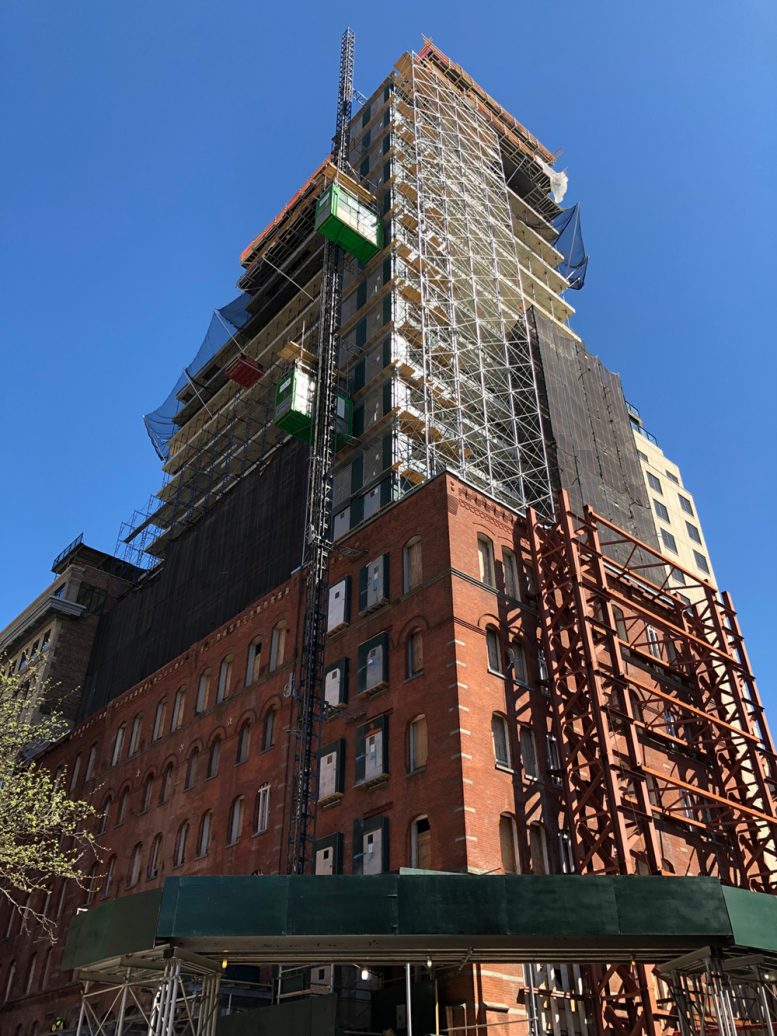 Looking up the northern corner of 100 Vandam Street. Photo by Michael Young

YIMBY went on a hard hat tour of 100 Vandam Street, where a 131-year-old coal power plant is being converted to a new residential structure that will rise above the existing load-bearing masonry podium. The site is located in the booming Hudson Square neighborhood at the corner of Vandam Street and Greenwich Street. The construction project, which is being designed by COOKFOX and developed by Jeff Greene, will bring the total height of the new 25-story building to 330 feet. 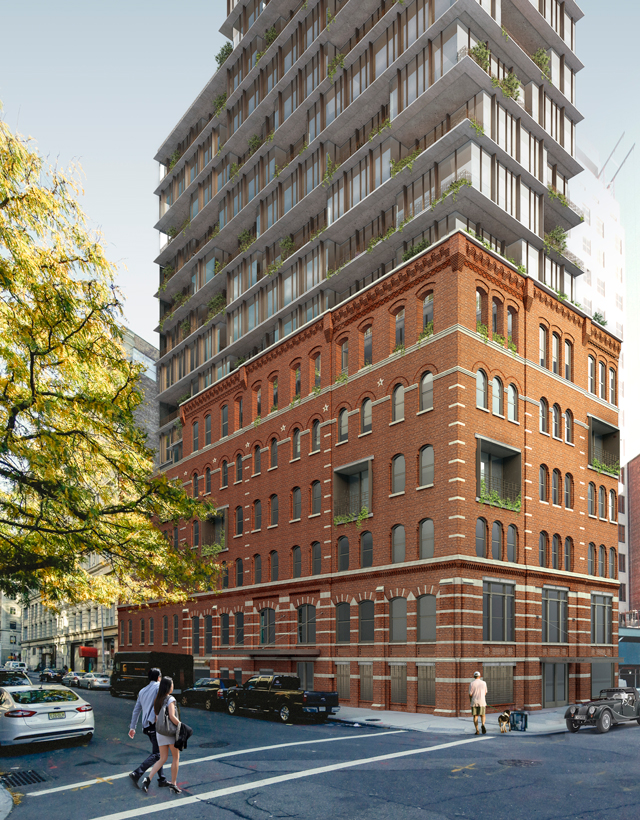 The multi-story, temporary steel bracing structures that were placed along the north elevation have all been disassembled and now reveal the masonry edifice and the beautiful array of arched windows. 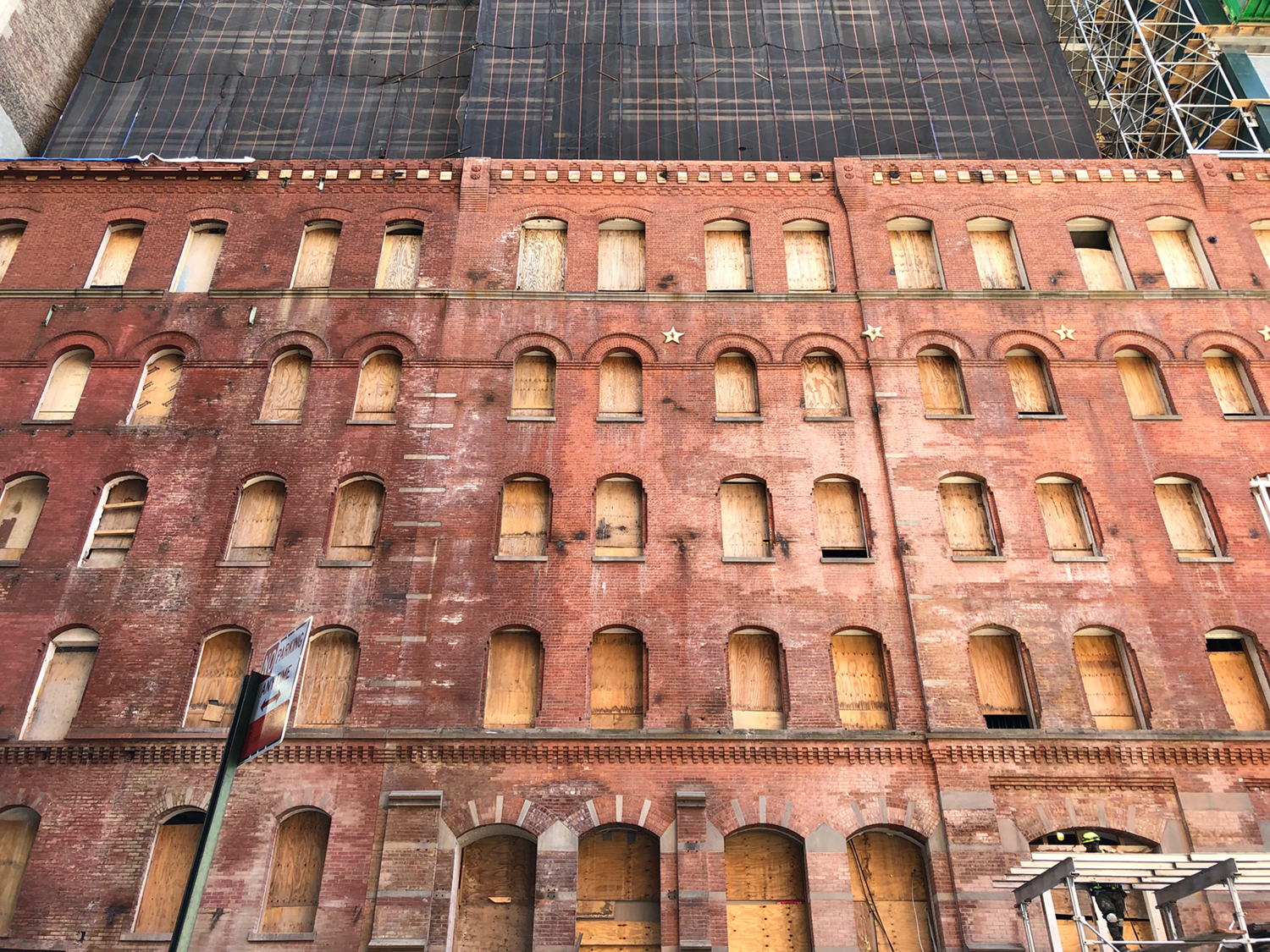 The northern elevation of the existing historic structure, which will be incorporated as the podium in the new design. Photo by Michael Young 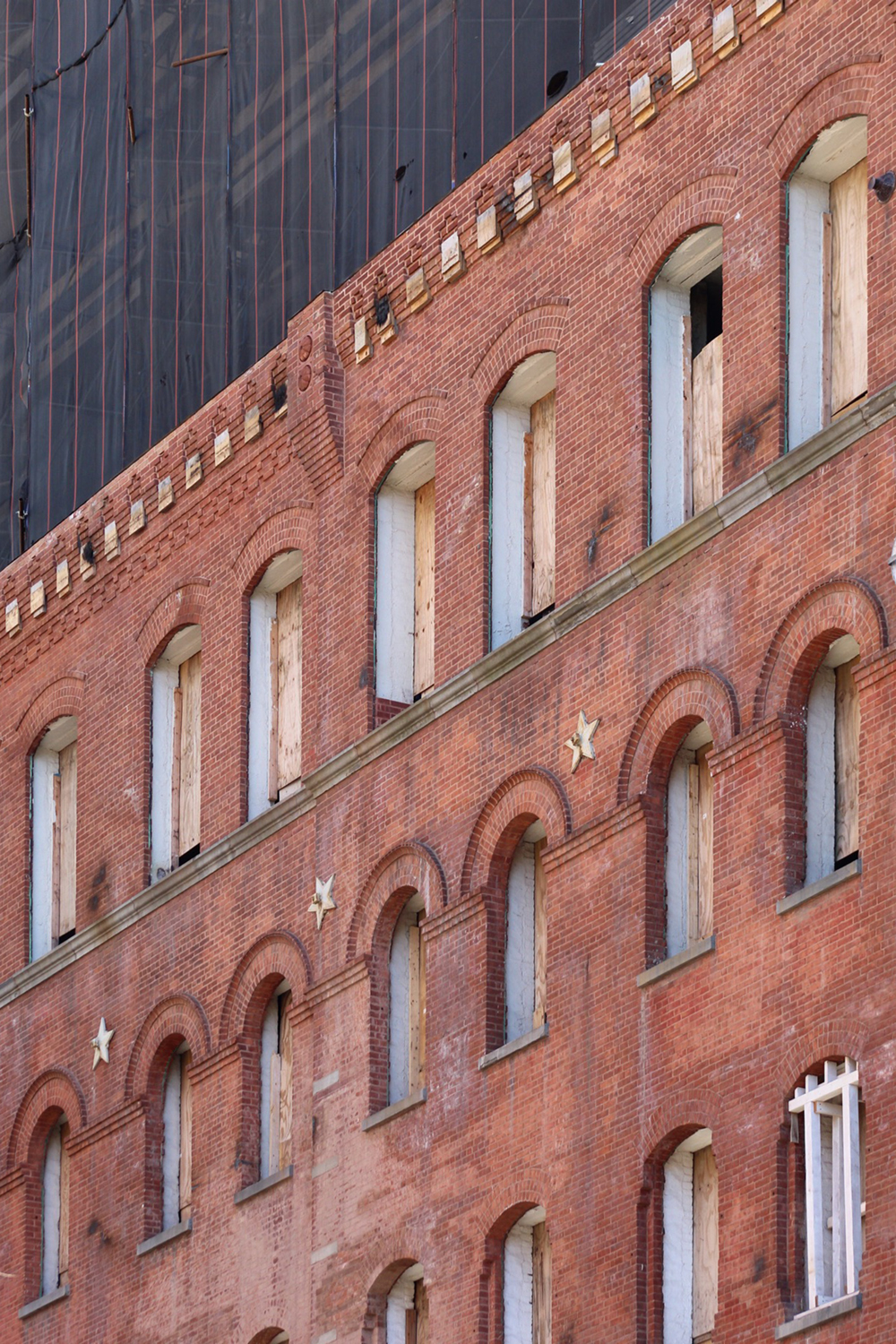 The rows of arched windows on the upper floors of the six-story masonry structure. Photo by Michael Young 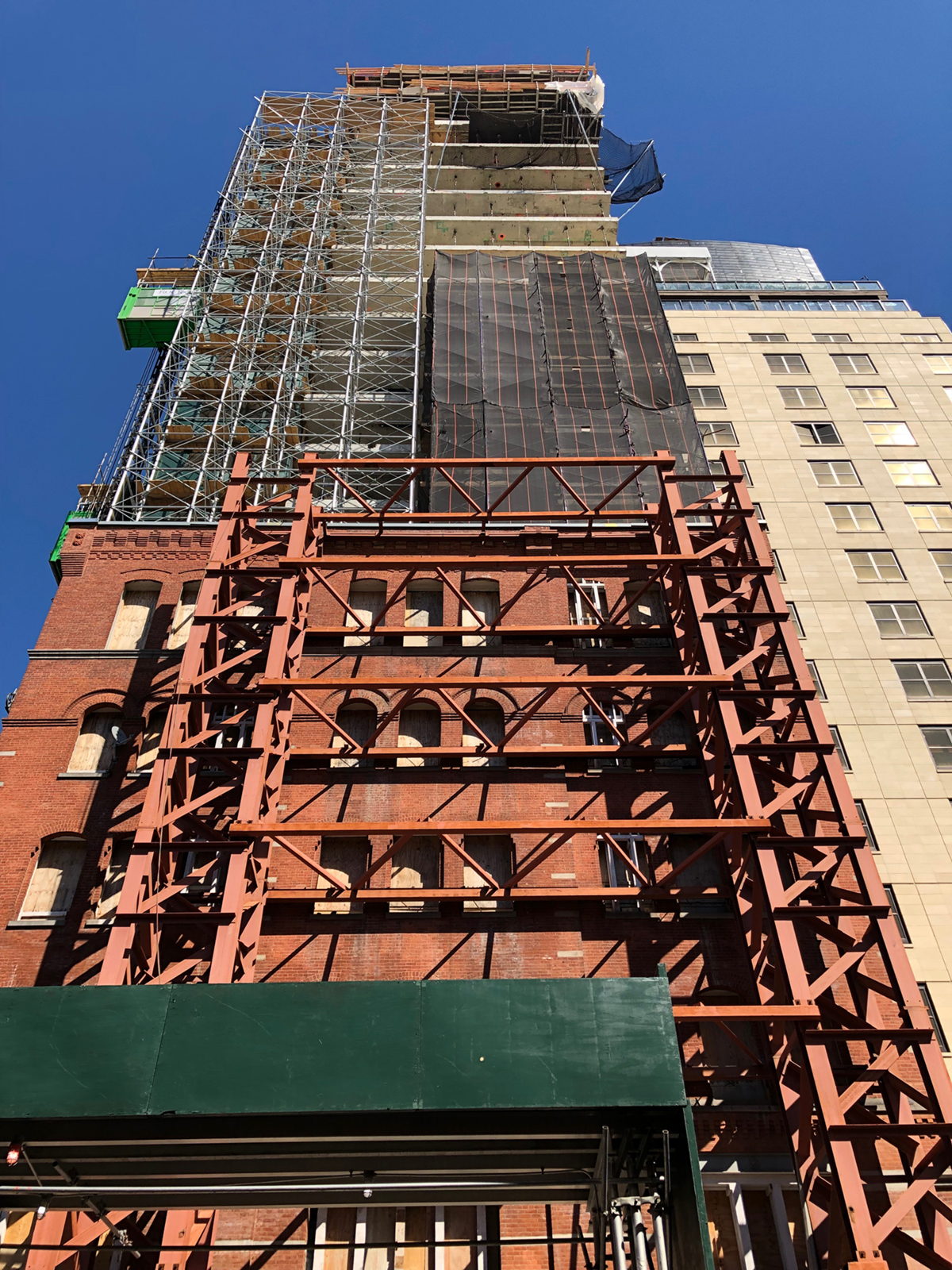 The western elevation with the last set of temporary steel bracings on the facade. Photo by Michael Young

There will be two main setbacks: one on the western elevation that will become a large private rooftop terrace, and one smaller one near the very top of the tower. A large mechanical extension will form the crown of the building and consist of thin bars of horizontal louvers. 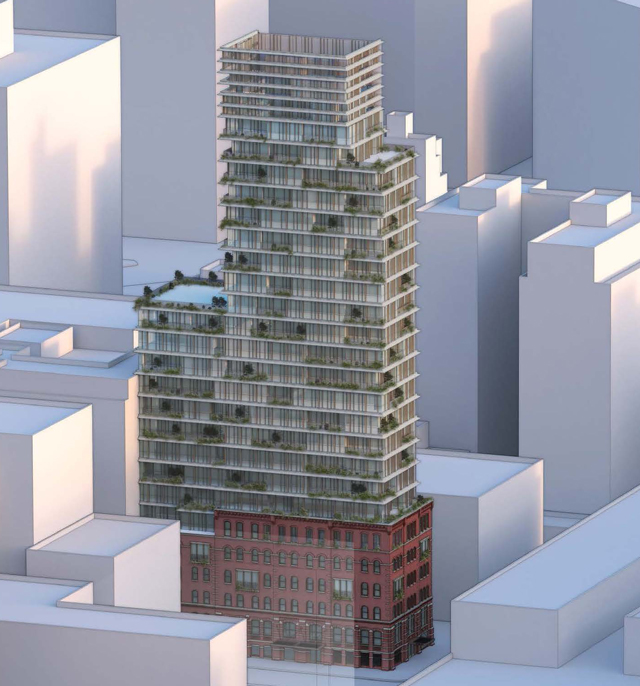 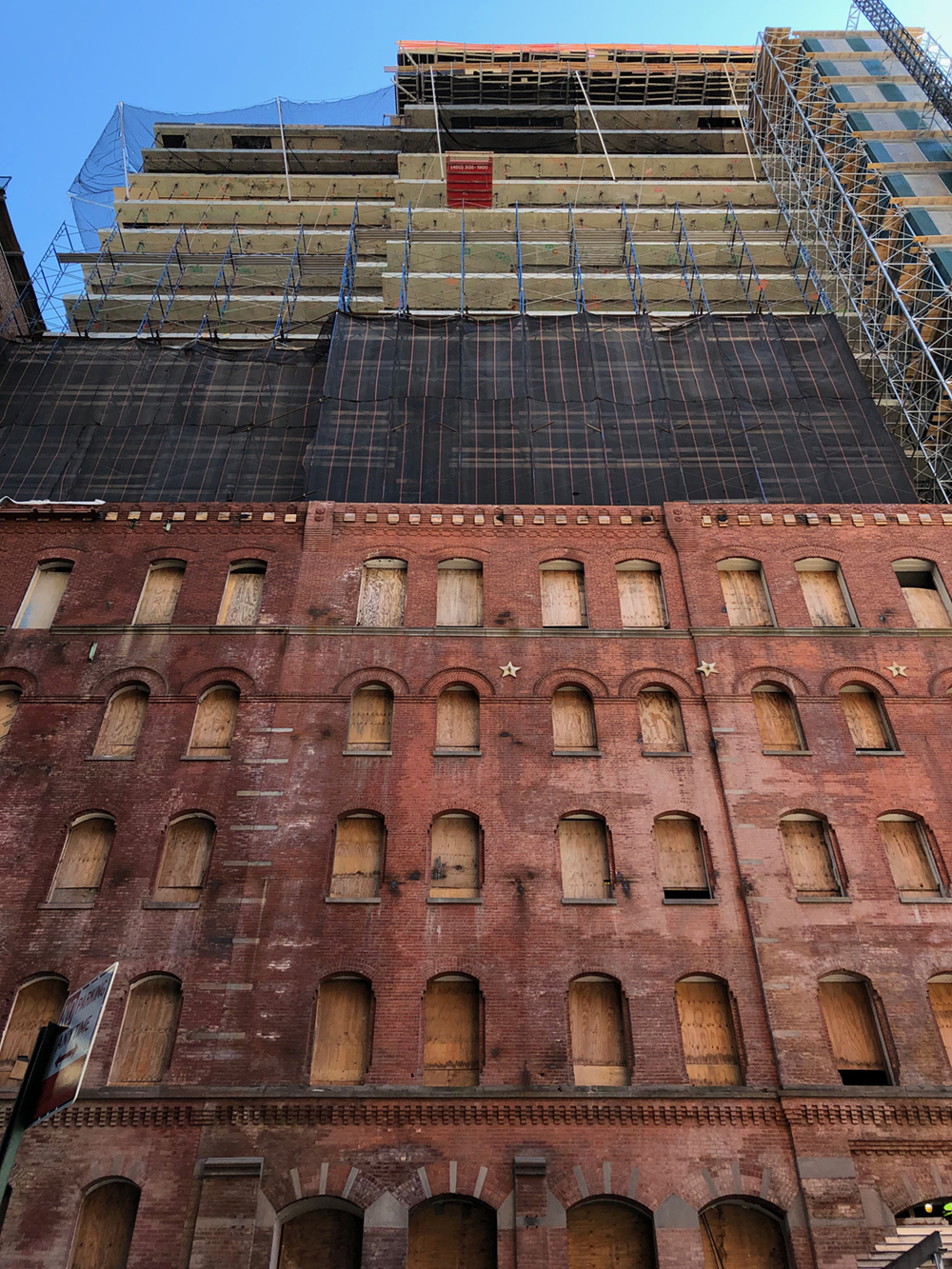 The view looking up already shows the contrast between the masonry walls and the concrete floor slabs above. Photo by Michael Young 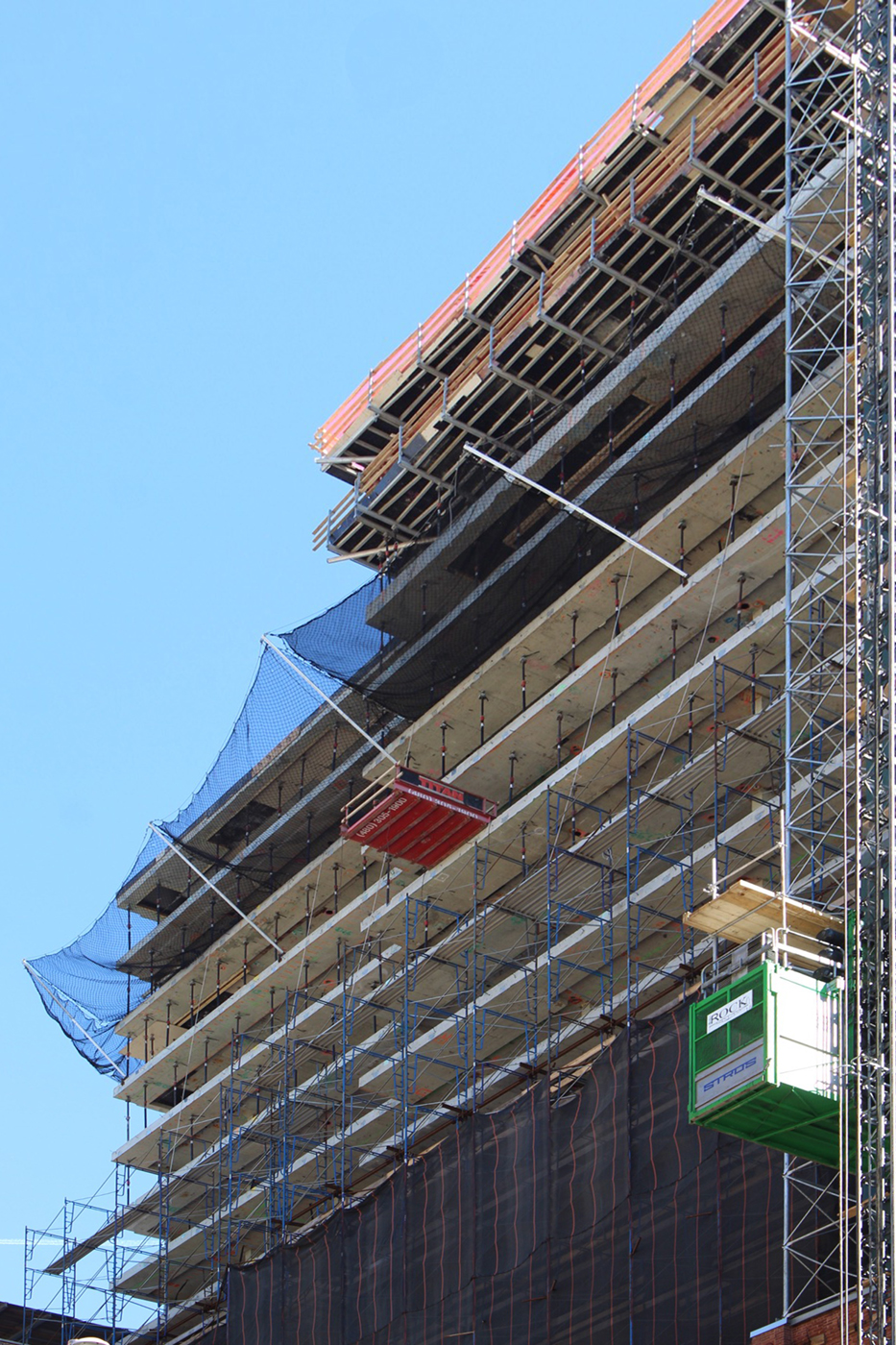 The northern elevation of the new edition rising above the first major setback. Photo by Michael Young

The photos below show segments of the façade that will extend from the perimeter of each floor slab, giving the building an extra layer of detail and definition. They also are designed to act as a solar shade. 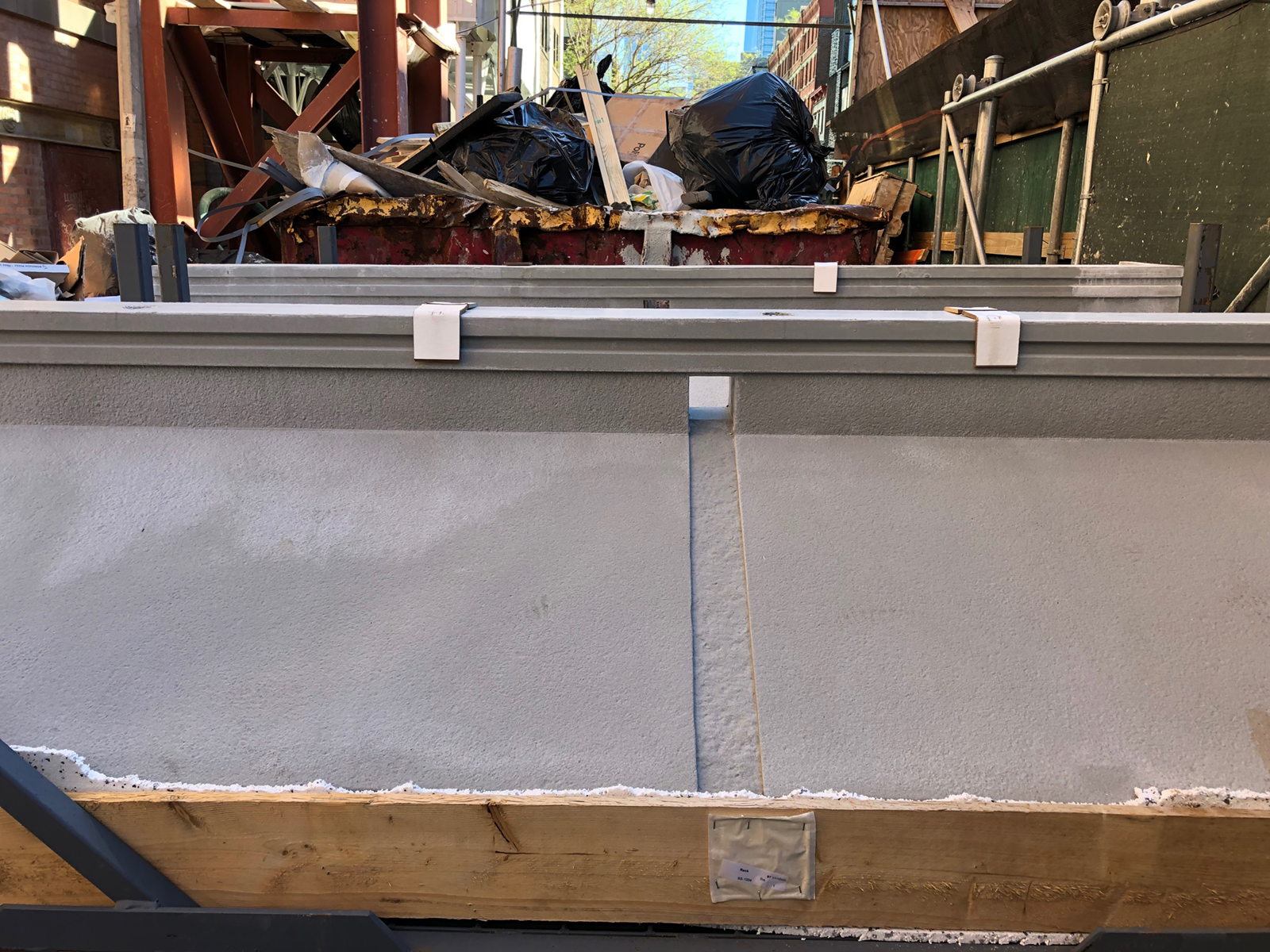 The front side of each downward-sloped panel. Photo by Michael Young 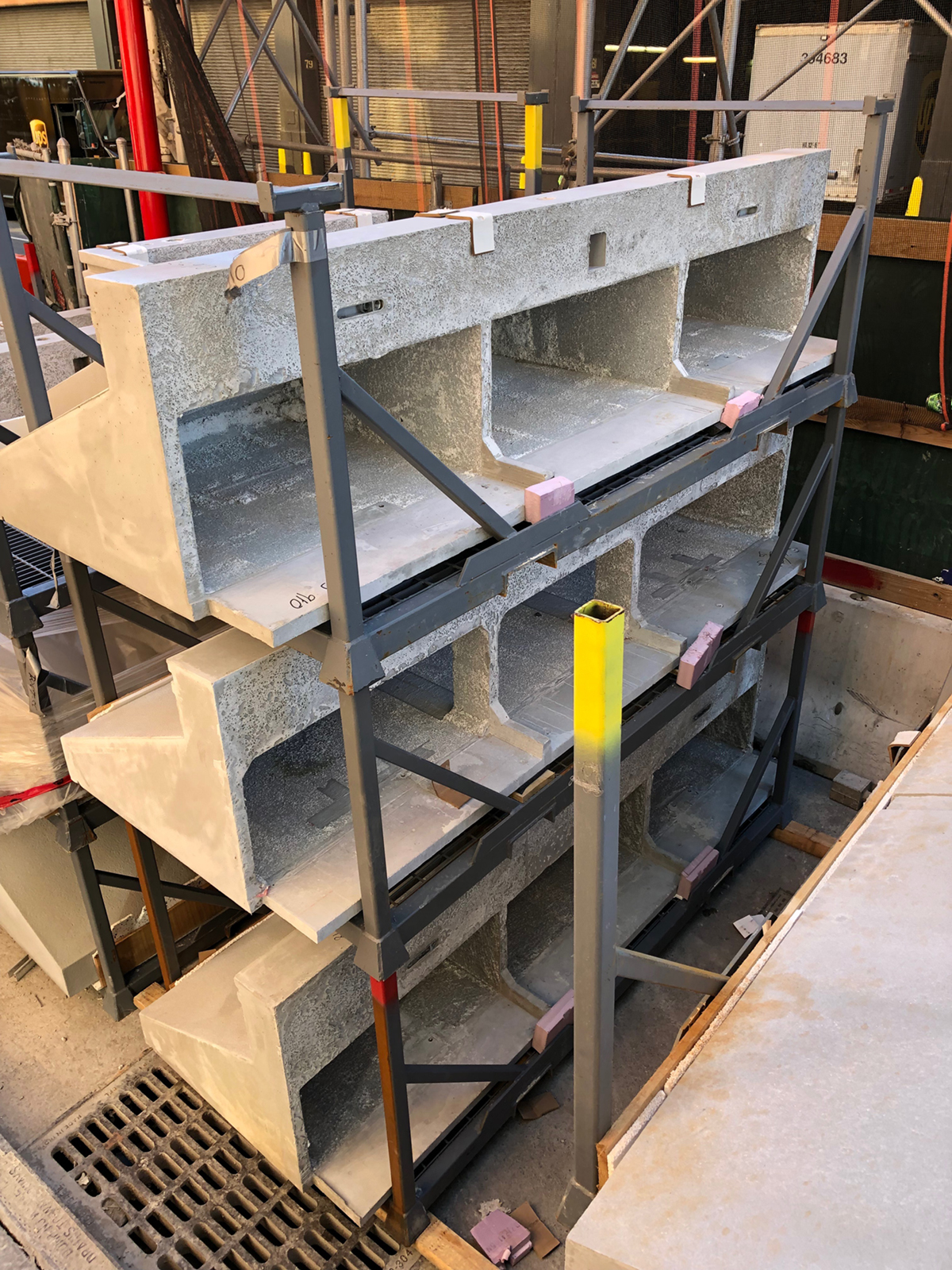 The back side of each panel with a hollowed frame to make it lighter. Photo by Michael Young 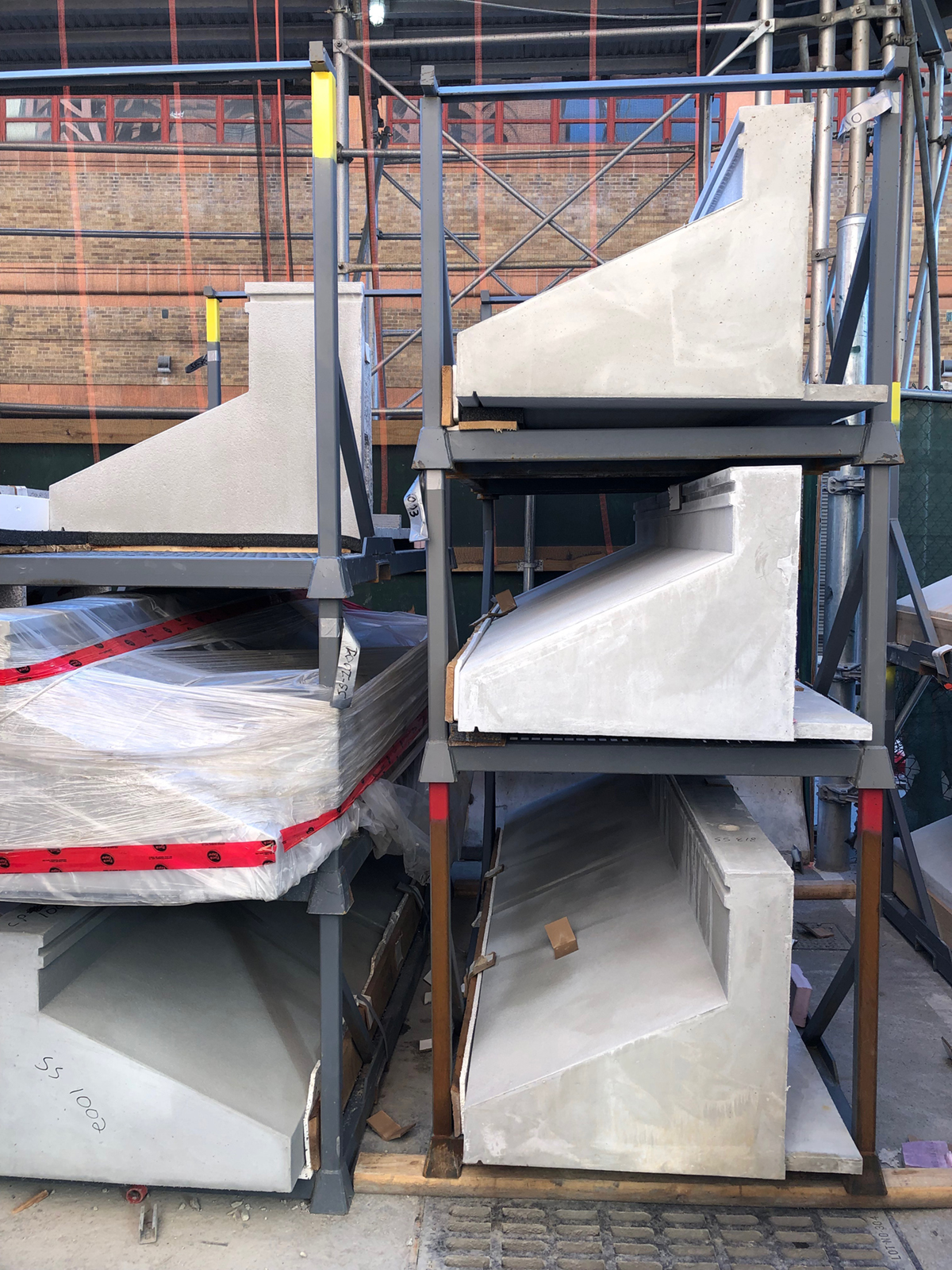 The side profile. Photo by Michael Young

COOKFOX is replicating the original building’s exterior brick masonry pattern in the interior renovation using new bricks. The photo below shows the construction of one of several outdoor terraces that will sit behind an exposed arched window. The gray-colored bricks in the image are part of the old bearing walls, and will be covered up. 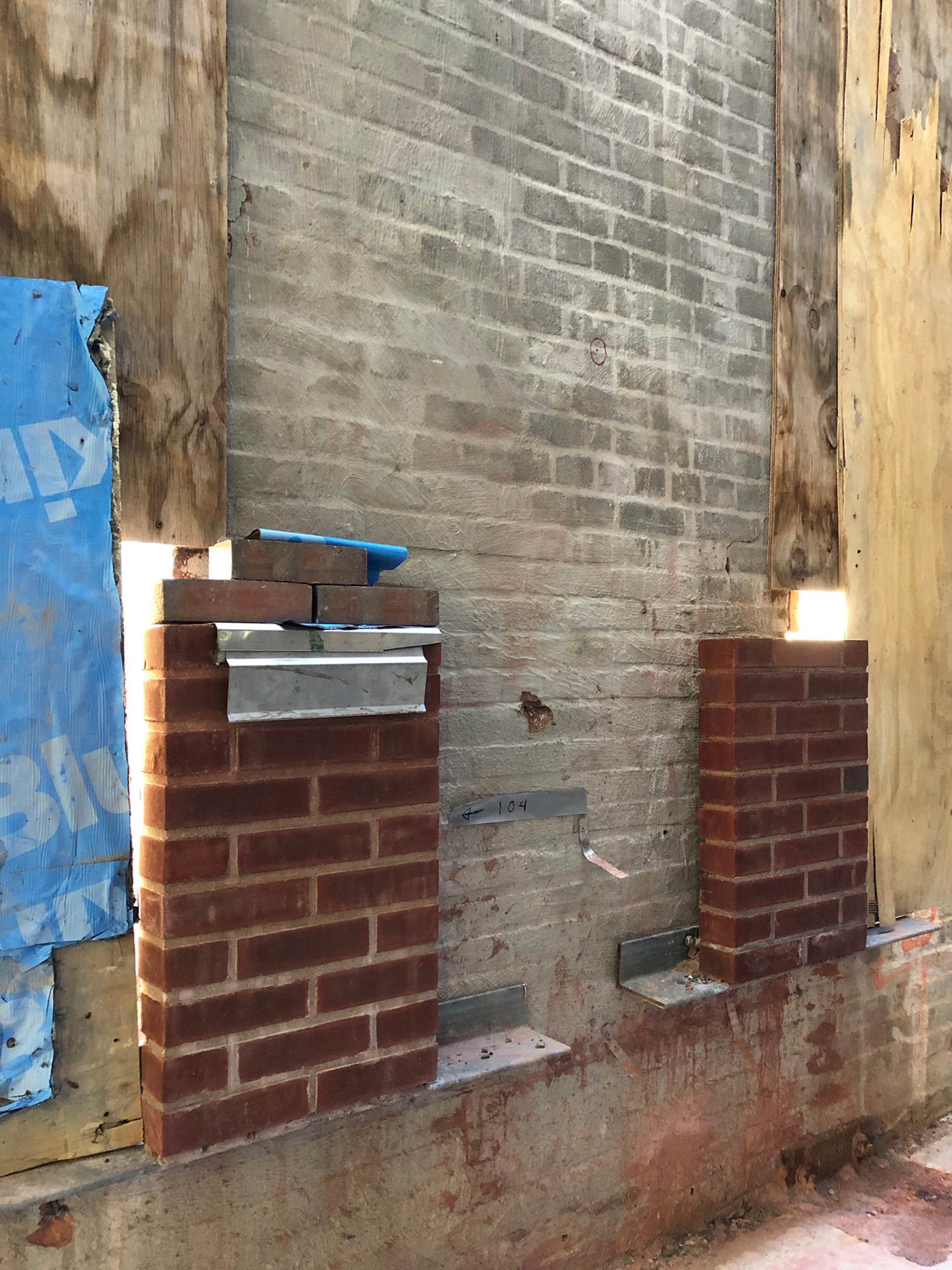 A new layer of bricks will continue the masonry run from the outside to the inside. Photo by Michael Young 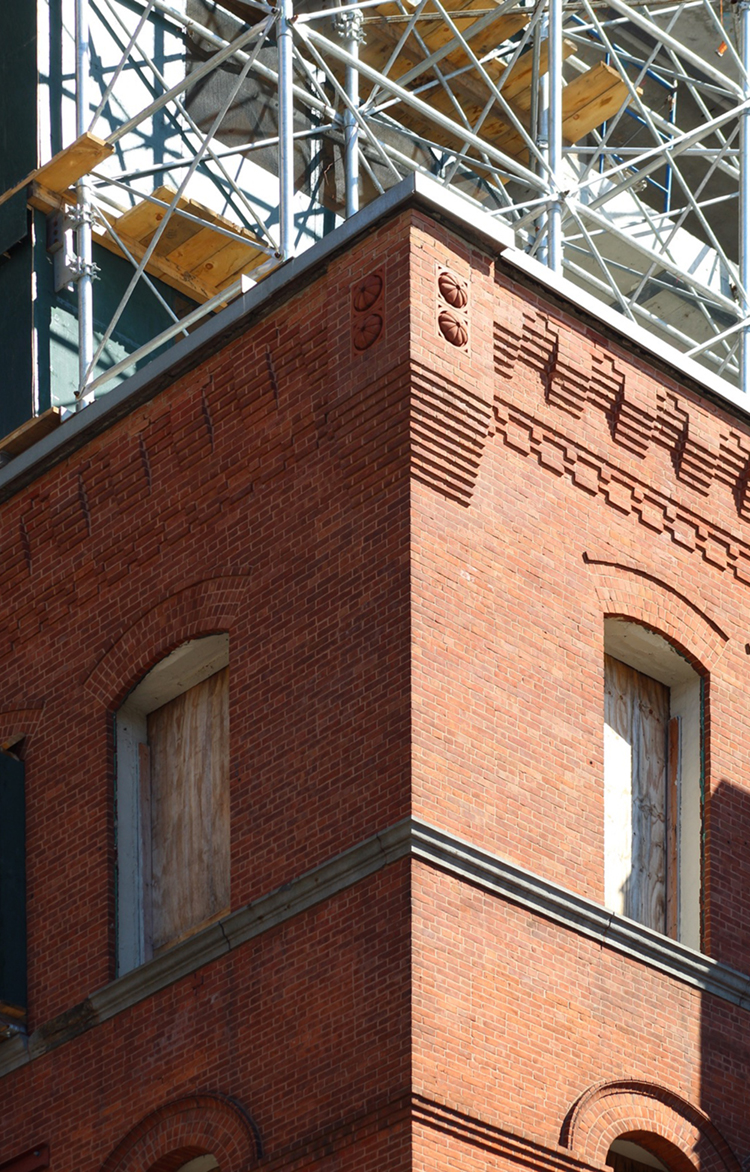 Closeup of the arched windows. The sides of each window frame will get a new set of bricks that will continue the running bond pattern around the back side of the shear wall for the residential units. Photo by Michael Young.

Along the perimeter of each floor slab are several shallow sunken pits that will eventually become loggia gardens designed by Terrain-NYC. They will sit between the floor-to-ceiling glass panels and the edge of the building. The vegetation and greenery will add a sense of comfort and bring together native plantings with the warm materials of the floors, ceiling, and interior finishes. This mindful decision will also coincide with the wide views of the city on every floor. Drainage and irrigation pipes will run through the slabs and use collected gray water for the plants and make the building environmentally friendly. Some of the gardens will be set adjacent to the living spaces, bedrooms, and bathrooms, and will be scattered across each façade in a staggered, irregular pattern. Etched railings will emulate the pattern of the glass curtain wall and thin columns in between each level. 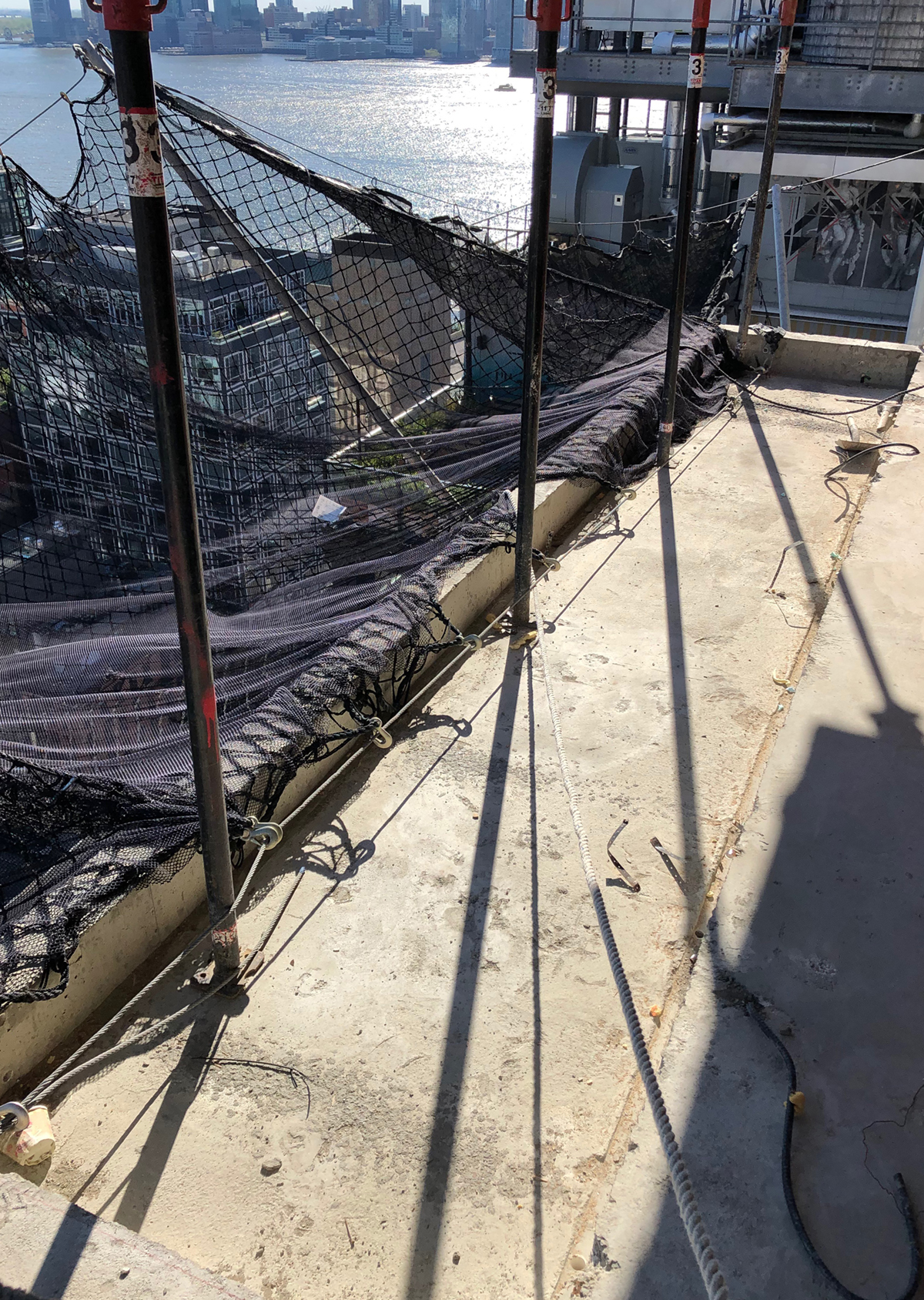 One of the shallow pits for the loggia gardens that will surround the edges of each floor. Photo by Michael Young 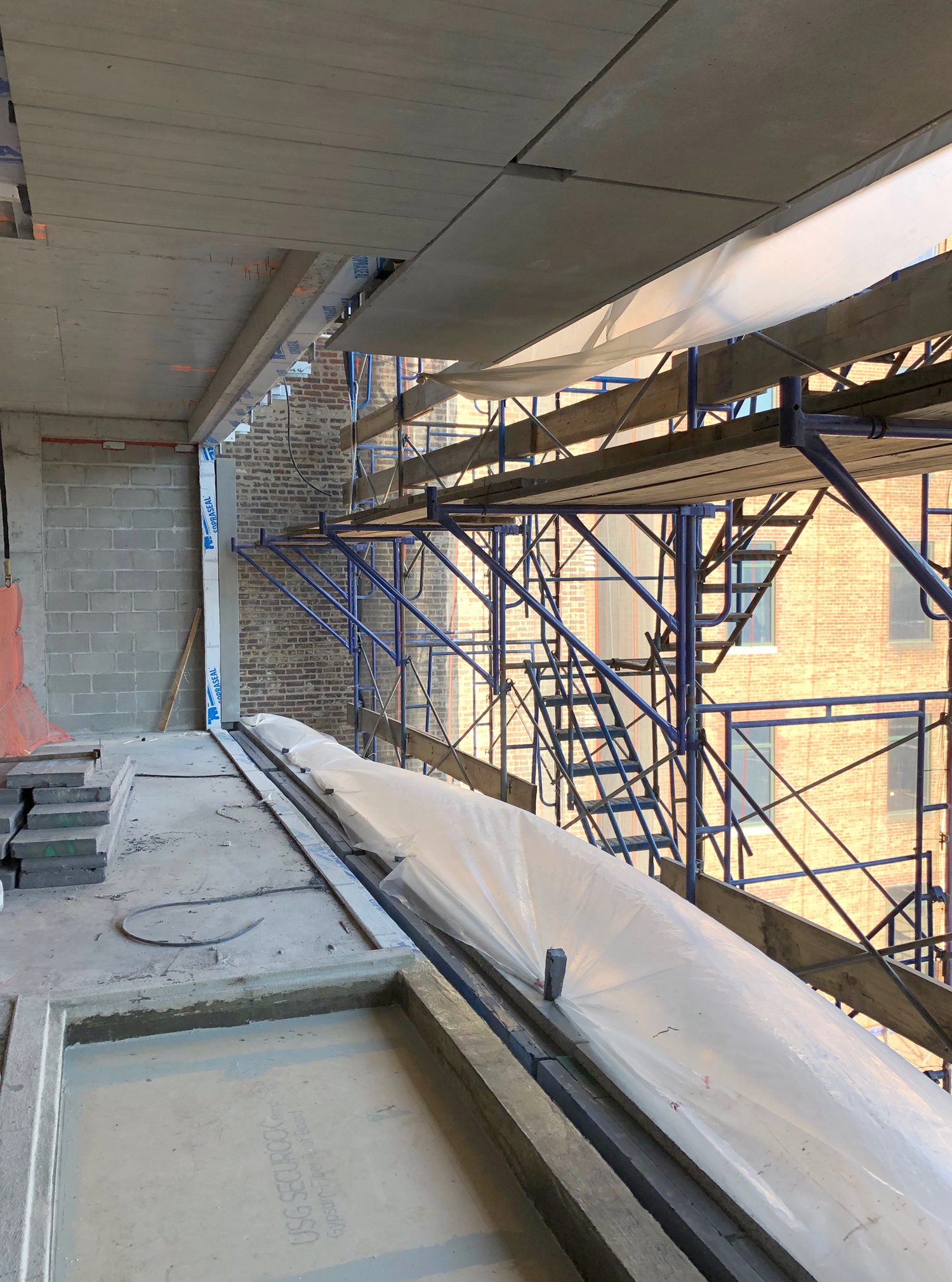 Part of the wood ceiling is going in on the lower levels of the new addition. The first segments of the solar shading precast panels can also be seen, divided by a narrow crease. Photo by Michael Young

Meanwhile, views from the top of the first setback give wide panoramic views of Manhattan. The upper portion of 100 Vandam continues to be assembled. 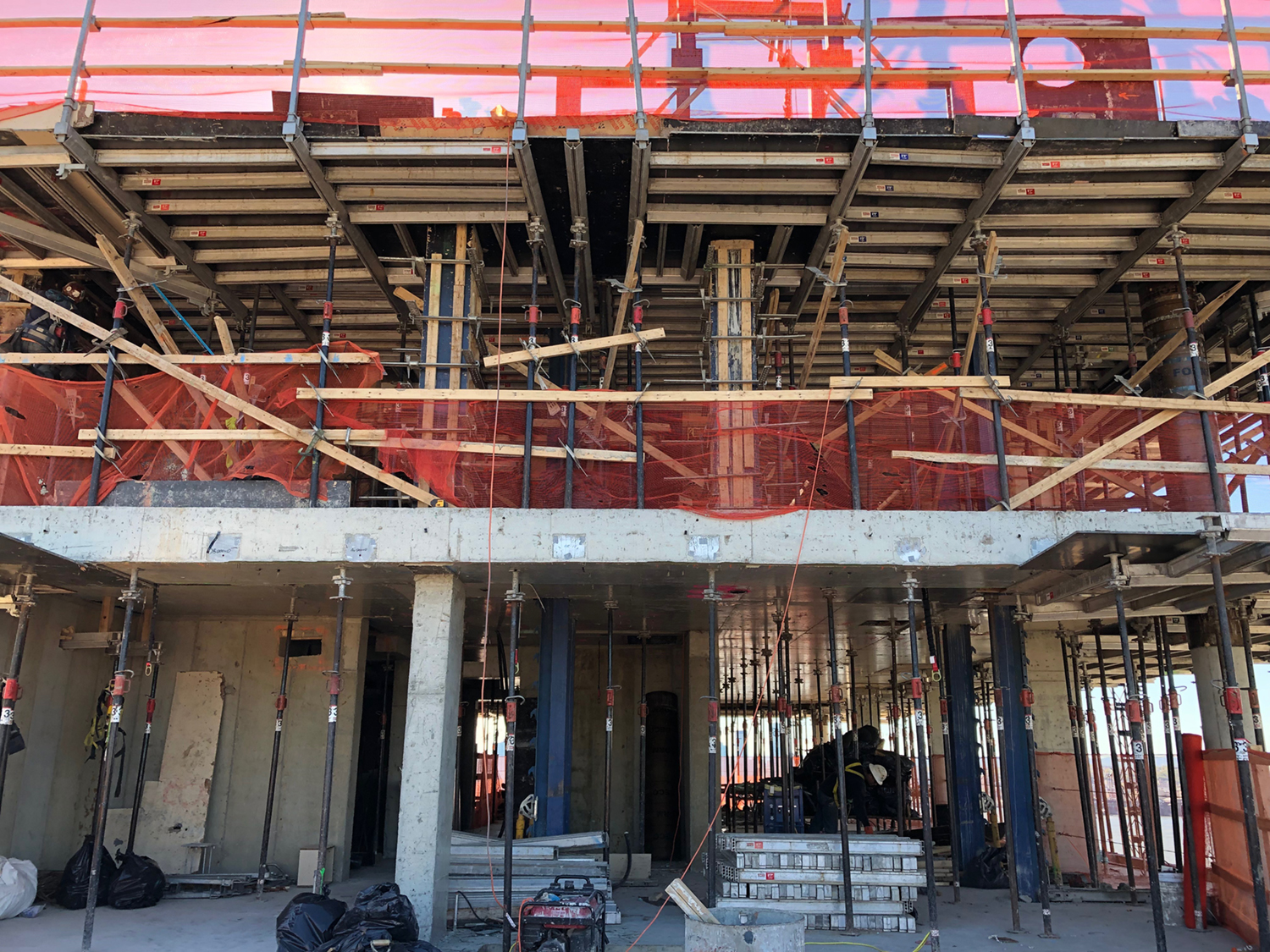 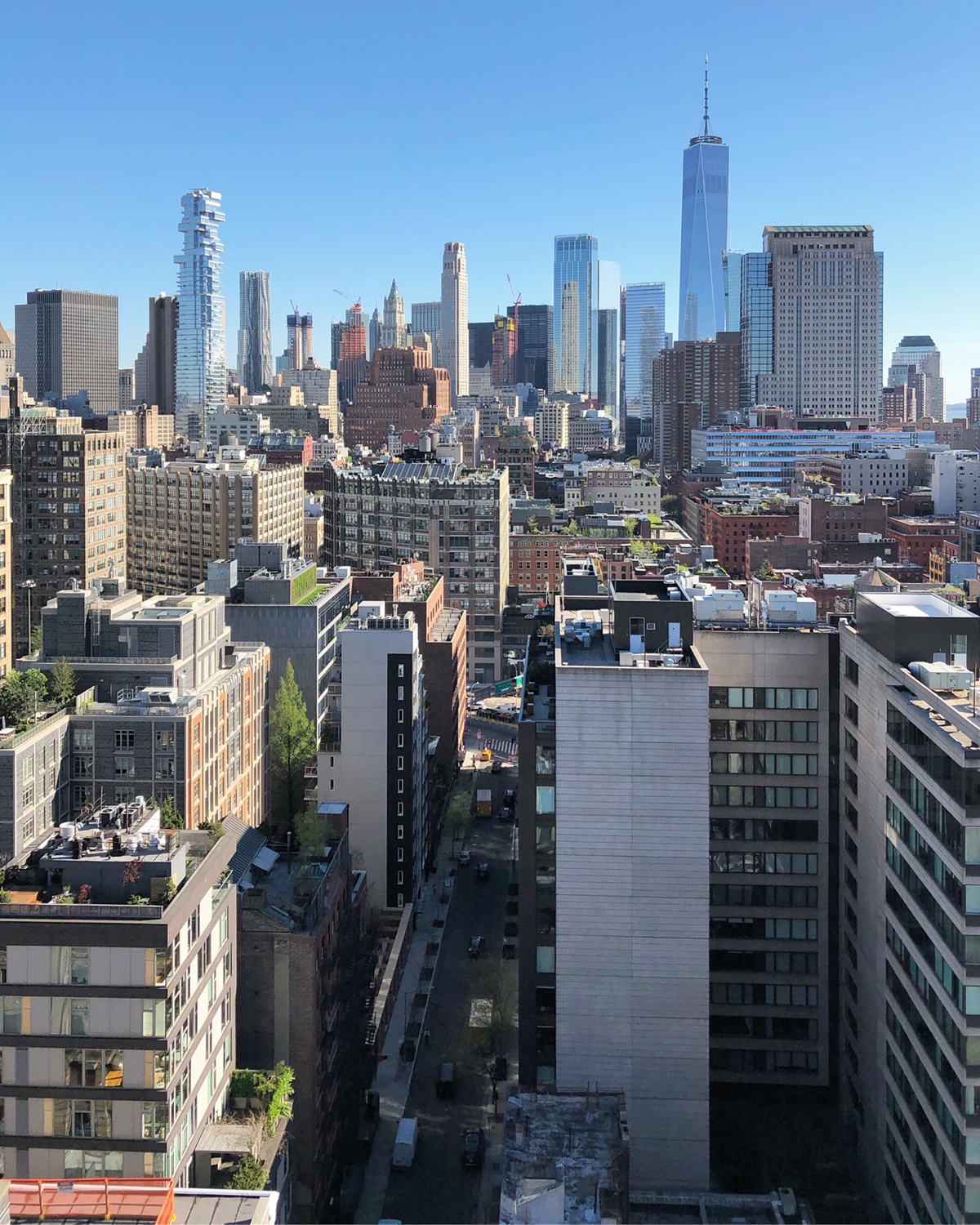 Lower Manhattan from the large private outdoor terrace on the western setback. Photo by Michael Young 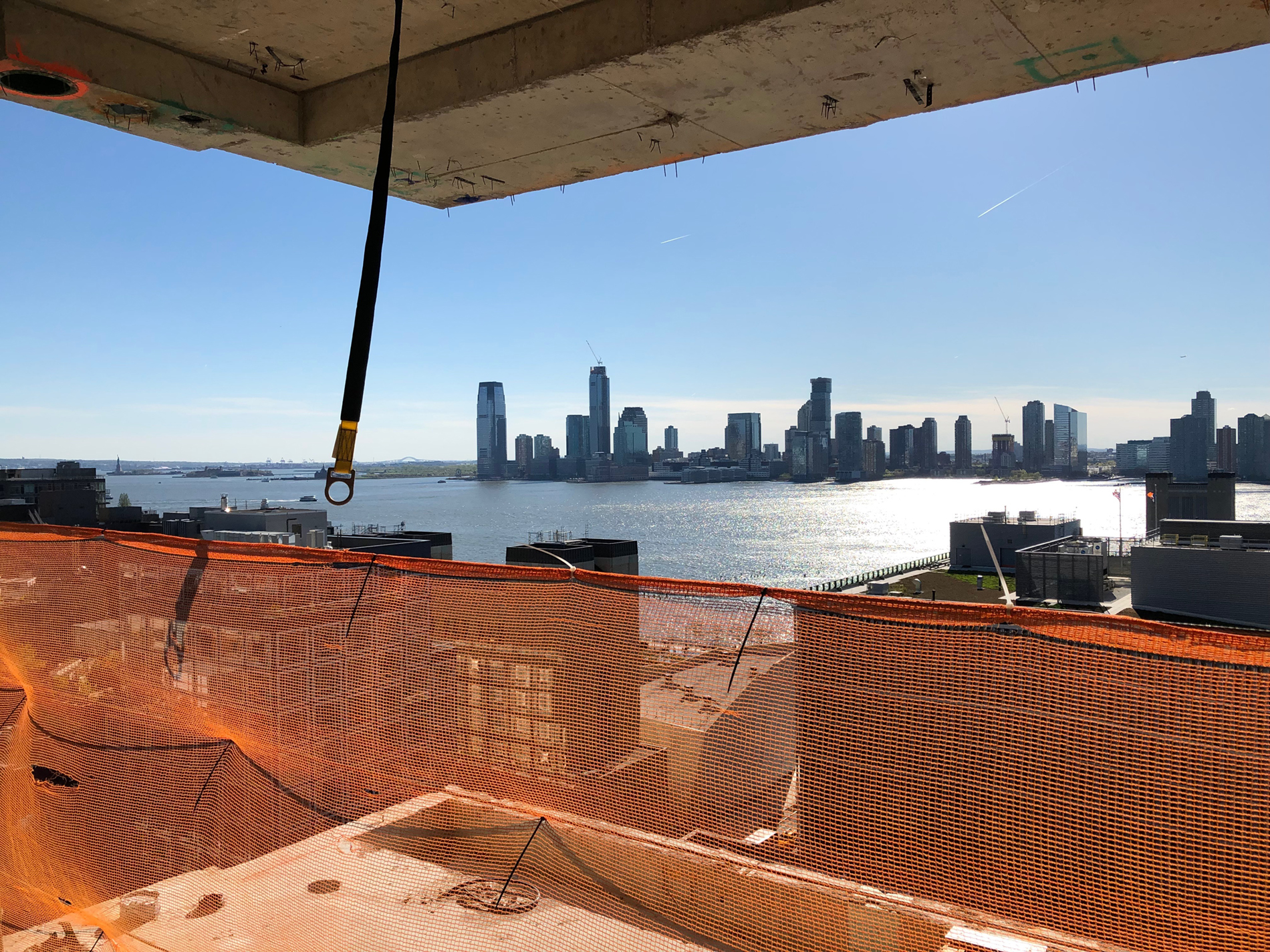 The tower’s prominence among the surrounding neighborhood provides excellent uninterrupted vistas of the entirety of Lower Manhattan. The upper floors will provide clear views of Herzog and de Meuron’s “Jenga Tower” at 56 Leonard Street in Tribeca, Frank Gehry’s wavy, shimmering edifice at 8 Spruce Street, Sir David Adjaye’s upcoming condominium at 130 William Street, COOKFOX’s tallest downtown project at 25 Park Row, the iconic Woolworth Building, Robert A. M. Stern’s hotel and residential skyscraper at 30 Park Place, and One World Trade Center in the Financial District. Future residents will be treated to the diverse array of architectural icons rising above the southern tip of Manhattan, as well as the sunsets over the Hudson River and behind the emerging Jersey City skyline. 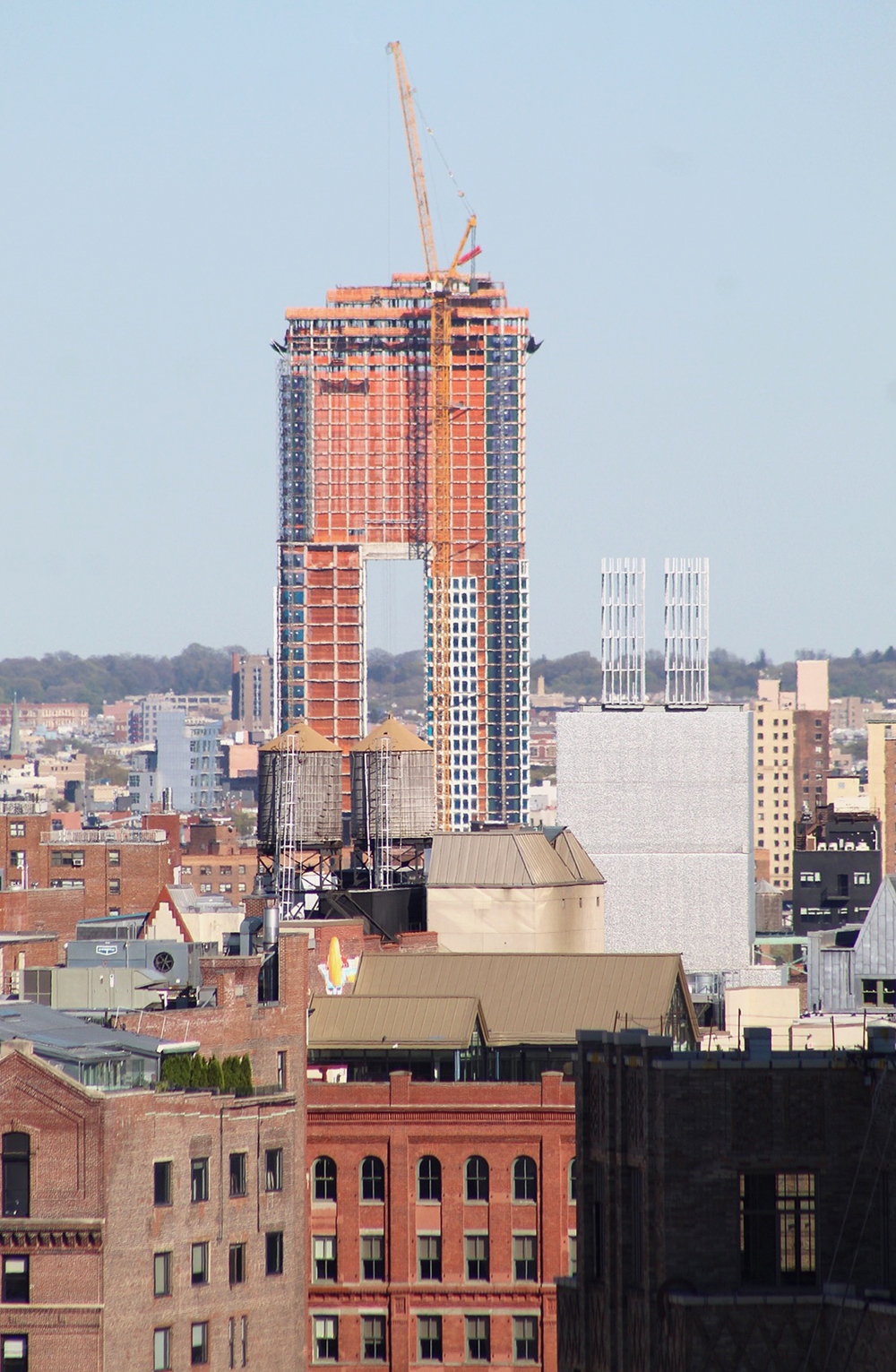 One South First rising in Williamsburg by Domino Park. Photo by Michael Young

In the distance, one can also see the rising reinforced concrete superstructure and bold pattern of windows enclosing One South First, another residential development by COOKFOX and the second new building being constructed along the Williamsburg waterfront at Domino Park. 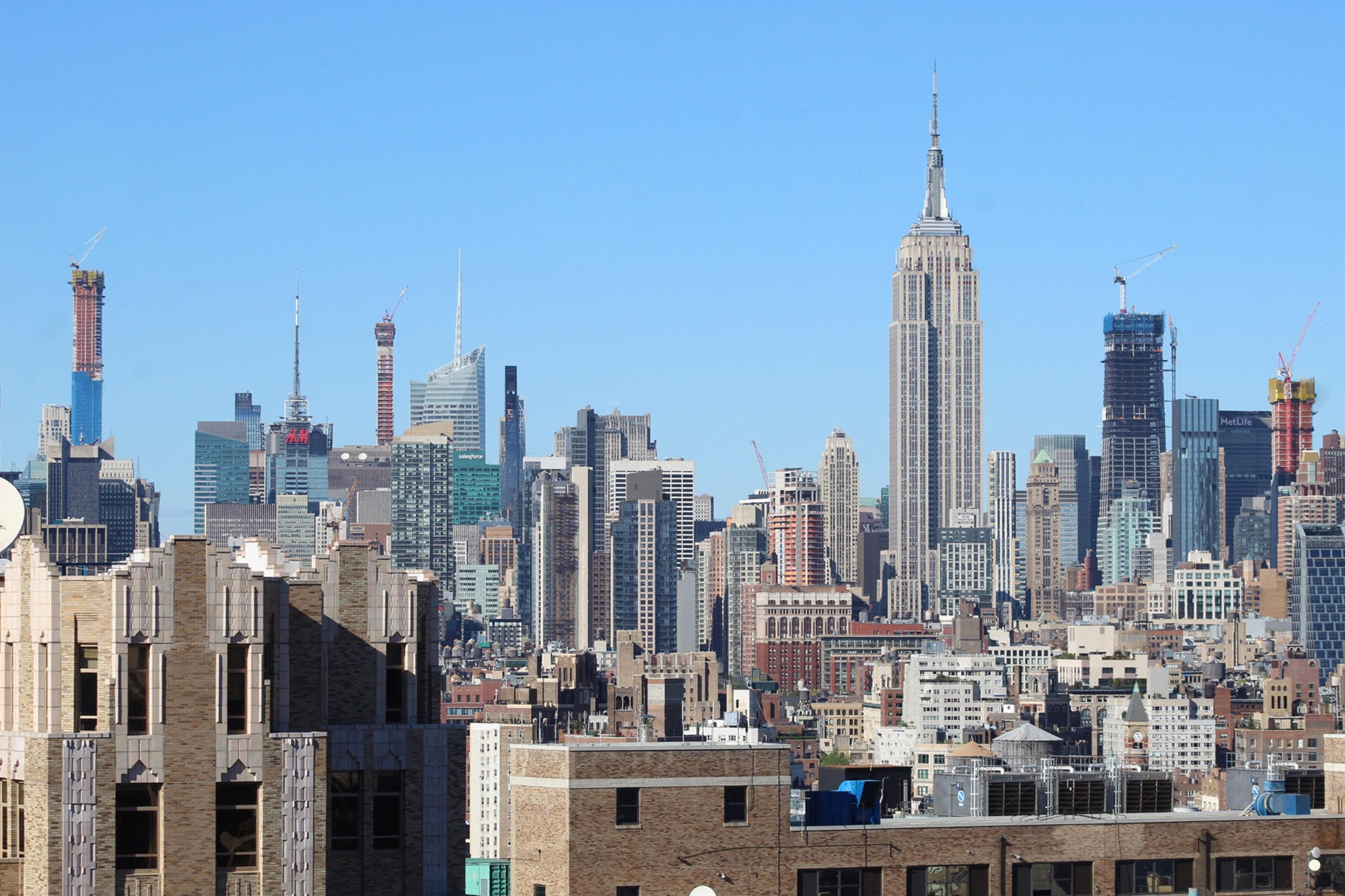 The closest subways are the 1 train at Houston Street and the C and E trains at Spring Street. Hudson River Park is only a five-minute walk to the west. A large number of boutiques, designer stores, and dining options can be found in SoHo by walking east on Spring Street.

Construction of 100 Vandam Street is expected to be completed sometime next year.