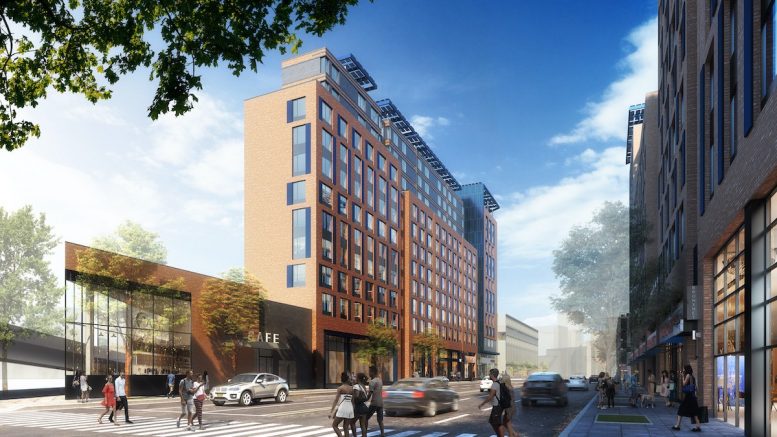 Hudson Companies has achieved a major milestone at La Central, a 1.1-million-square-foot affordable housing development in The Bronx, where a collection of new commercial tenants will soon open shop. Tenants include a community-based café, a sit-down Mexican restaurant, a take-out pizza shop, an organic grocer, and an operator for the 135-space on-site parking garage.

Designed by MHG Architects, FXCollaborative, and Future Green Studio, completion of the development’s two new structures represents the second phase of La Central’s three-phase masterplan. These properties are located at 556 and 600 Bergen Avenue in the Melrose section of The Bronx.

When fully operational, the phase two properties will contain 496 affordable residential units, a new 50,000-square-foot YMCA, a television studio for BronxNet, and a GrowNYC-operated rooftop garden. The commercial tenants include the Taste of The Bronx Cafè and Metate Authentica Comida Mexicana.

Leases for the commercial component were co-brokered by KZA Realty Group and RM Friedland, and amount to 6,710 square feet with 36,904 square feet for the parking garage.

“These new tenants will help transform La Central into a neighborhood destination, bringing beloved Bronx businesses and needed amenities to the community,” said Aaron Koffman, principal of the Hudson Companies. “We look forward to welcoming residents to these exciting new spaces at La Central next year.”

The three phases of La Central will comprise five individual buildings and will include 992 affordable residences, an interior landscaped courtyard, 80,000 square feet of community facility space, a public park, 45,0000 square feet of retail, and a roof-mounted telescope to be controlled by the Bronx High School of Science.

The final phase is expected to be completed in 2023 and will contain approximately 350 affordable apartments at a range of income levels.